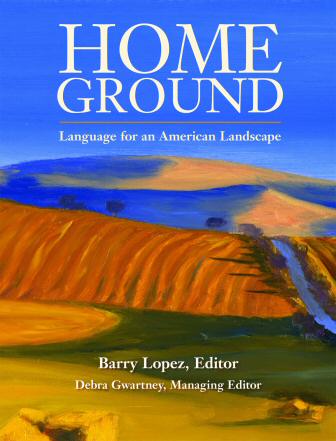 Here’s one of the reviews I wrote for Suite101.com. The copyright recently passed to me, so I can share it with you here.

It’s of Home Ground, a book that deals with the concept that is most on my mind these days: place. The more I think about place, the more it amazes me that its concept (if not the physical thing itself) entails all the other concepts at the heart of our endeavor: nature, culture, self-knowledge, sustainability, wholesomeness, care…

Home Ground reflects this complexity, so it is a book that is within reach at all times at our house.

With over 850 definitions of landscape features, many specific to America, this book is about geology and history, American identity, and how one makes a place home.

In Home Ground, Language for an American Landscape, Barry Lopez (editor) has brought together forty-five writers and more than 850 new definitions for the terms Americans use to describe their unique land. Some of the contributors are Michael Collier, John Keeble, Barbara Kingsolver, Jon Krakauer, Bill McKibben, Robert Michael Pyle, and Barry Lopez himself.

What is so fascinating about these definitions is that they are (mostly) not technical, objective, general or scientific â€“ however you want to describe the glosses in an average dictionary. Indeed, the intention is not to give standard definitions, but to approach the subjects from personal and specific point of views.

The personal line may be that of the authors, each of whom tackles the terms they are familiar with because they actually live with the landscape features they describe. Each was free to impose their own style, making some entries read like fairy tales, prose poems, or even jokes.

The personal is also injected by the inclusion in the definition of the people who invented, imported and evolved the term as they made themselves at home in a place. These can be a large group of people such as the Inupiaq, whose word for a swollen ice hill informs the Canadian and Alaskan word â€œpingo.â€ Or Conquistadores importing Spanish adaptations of Latin and Arabic words. Or a romantic ranger inventing the word â€œkiss tankâ€ for the pool of rainwater that refreshed him in a dry place. Or even an individual, like Farmer Peek, after whose kill or brook the city in New York is named.

The authors know that only such personal connections can make these terms recognizable and thus usable to us. For, notwithstanding our alienated and predominantly urban existences, we are still looking for a place to call home. And a large part, if not the first part, of making oneself at home is naming the features of the new and alien landscape and thus appropriating it, in a way.

And letâ€™s face it: we have lost the skill of naming. Land is merely a valley, a mountain or a plane. Water is but a lake, pond, river or brook. Such an impoverished language will not do if we want to honor a place as home and take care of it as something precious and worth preserving.

Home Ground re-introduces us to a treasure trove of words and definitions, some very old and on the brink of extinction, some relatively new. It offers time-tested approaches to how to make up our own terms. Home Ground is thus a dictionary, an etymology, and a collection of essays about place and our habitation of it.

It must be added that, though the explanations are personal, they are still accurate. The authors did careful research, in the field as well as in reference books geology and history. And the scientific accuracy of each entry has been checked by an advisory board.

Another way in which Home Ground strikes a departure from the average dictionary is its realization that it is the writers who keep these special words alive. It is up to the settlers and inhabitants to name the places and their specific features. But it is up to the novelists, poets and essayists to record and preserve, interpret and explain these in their specifically human context.

The scientists â€“ geologists and geographers â€“ strive to make descriptions of place generic so as to fit them into an all too common framework, one that is too general to have any purchase on our minds. Writers, on the other hand, keep words alive in the lived-in situations of their stories. Thus Home Ground demonstrates how so much of American literature has been shaped by the American landscape.

This brings us to quintessential American-ness of the book. The authors make it clear that their effort is â€œan invitation to learn American geography, to read American history, and to celebrate a deeply engaging dimension of American character.â€

Perhaps it is even this American character that makes an effort like Home Ground possible and eminently successful. The book celebrates a distinctly American attitude to a land that was only recently a vast, diverse and often frightening New World as yet unnamed and thus ready to receive names. It also honors the native names that were sometimes adopted by the settlers, sometimes ignored and overwritten â€“ but now, recovered.

Home Ground is not the kind of book you can read in one sitting. It is to be consulted again and again, measure by measure, for its scope is vast, even though its approach is personal. It also doesnâ€™t end on the last page: if the essays donâ€™t point you to more reading, the bibliographical note (however short) and the biographies of the writers will. The introductory essay by Barry Lopez provides more food for thought. There is also visual distraction in the form of 100 delicate black-and-white line drawings by Molly O’Halloran. If that were not enough, the authors invite readers to contribute their own landscape terms on the Home Ground website.

Home Ground, Language for an American Landscape was published by Trinity University Press in 2006.