After checking on a new beekeeper’s new hive, I rushed home to inspect my own hives.

I found Hive 3 doing well: lots of eggs, and brood in all stages, also lots of caps, and two frames entirely drawn out and capped, two more getting close. The Queen had lots of attendants around her, grooming her. I had been worried about this queen, as I had to release her from her cage myself.

Hive 2 was a different story. My first impression was that the busiest frames were too light. Also, no caps anywhere. A closer look revealed no eggs and no larvae either. Strange, I am sure I saw some of those when I last checked, on April 26, but they seem to have disappeared. The queen wandered seemingly aimlessly, without attendants. I even saw one worker react nastily to her – bad sign. And… no supersedure cells, possibly because none of the available eggs were viable.

Then I opened Hive 1, the three-year-old, strong one. Just the medium super revealed a wealth of mysteries. Weird comb, and queen cells, either supersedure ones or swarm cells. The latter would not surprise me. I’ve been expecting it to swarm for a while now. 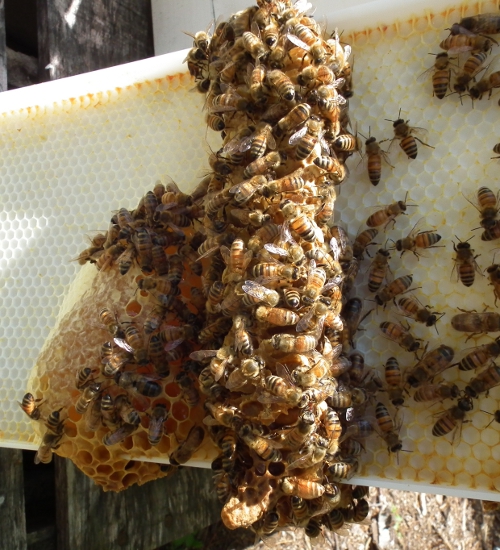 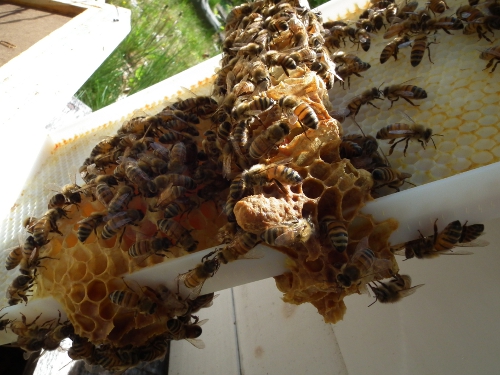 1. Pull a deep frame, with bees, brood, honey, swarm cells and all, from Hive 1 and move it into Hive 2. My bee teacher said the Hive 2 workers should accept this. That way I can save Hive 2, but Hive 1 will still swarm.

2. Find the old queen in Hive 1 (gulp!), move her with the frame she’s on and several more frames of brood and bees into Hive 2. This is called a split. That way I save Hive 2 AND it could just be there Hive 1 is fooled into thinking they’ve already swarmed, thereby forestalling a swarm.

In both cases I kill the failing queen in Hive 2. I read I should keep her body in a jar of alcohol. Apparently, if you soak several queens in alcohol to effectually make a “Queen tincture,” it can serve as a powerful lure for swarm traps.

I like experiment 2 best and am waiting for the first good weather moment to deal with it. It will depend on my finding the old queen, of course. Who knows if Â she’s still the one I got three years ago, with the blue dot.

But in case there is still a swarm, I will stillÂ set out a deep box with a couple of frames in an open, elevated spot and to bait it with lemon grass oil. Ideally I’d catch the swarm while it’s still balled up in a tree somewhere, waiting for its scouts to find a new nest. But if I can’t, then maybe they’ll choose my box.

I’ve written to my neighbors to keep them apprised and to forestall any alarm at finding a ball of 40.000 bees in their bushes! I’ve received “cools” and “excitings!” back. I have the BEST neighbors! (Beekeepers: keep your neighbors in the loop!)