We are having a friendly competition here on Robin Hill. DH built a solar parabolic cooker and I built a solar box oven (we helped each other, of course). You can’t really compare the two because the oven is, of course, vastly superior in that it has many more functions: it can cook as well bake,Â and it will serve as a beeswax melter. But, one has to admit, the parabolic cooker is more spectacular.

This is its present state: 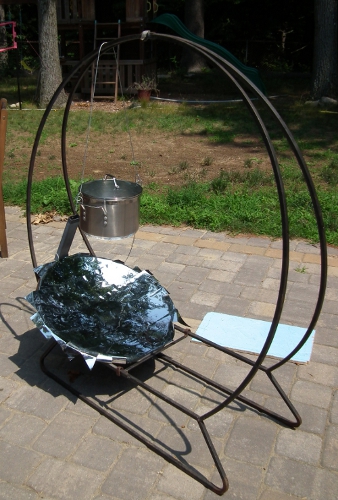 The dish can be positioned on the fire wood rack so it lines up with the angle of the sun, and the pot too can be moved. 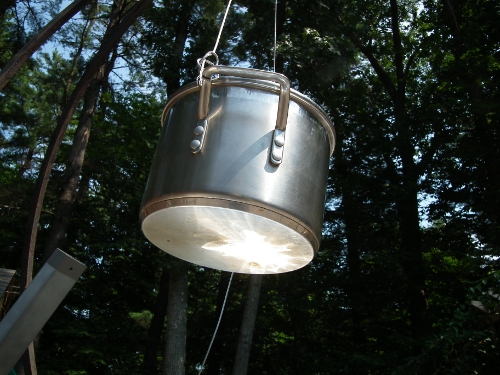 When we held our best thermometer to that lit up spot on the pot, it started fuming. Time to get an infrared thermometer? Â It wasÂ alsoÂ time to take my favorite, expensive pot away. NowÂ we’re looking into a cast iron plate to hang so it will diffuse the heat. Maybe then we can also fry an egg? Â We’ll try again when we have the plate in place.

But… back to the oven, where the real action is:Â 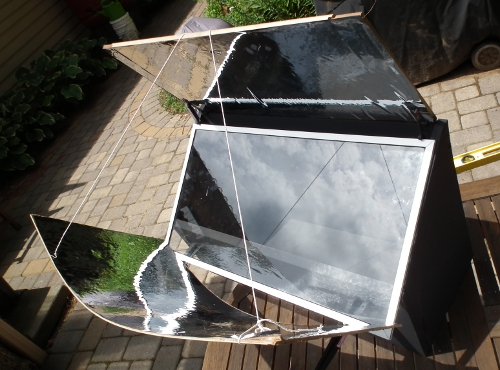 Had lying around: old kitchen cabinet from the landfill, sheet of Mylar, wooden panel that was easy to warp, storm window, two brackets. Â All we had to buy was the glue to stick the Mylar on and the high temp black paint (which was also used to repaint the grill, while we were at it). I made the design as simple as can be. Â You can adjust the angle of the top flap (cabinet door) by sliding the window up or down. The bottom flap can be adjusted by tightening or loosening the string. Everything comes apart for easy moving.

I built it on a cloudy day (as can be seen from the picture). In a first test it got water in a pot up to 130F, but then there is that gap up on top through which all the heat leaks out.Â I need to plug it with some sort of gasket and find a black pot, wait for a full sun day, then do a serious test.

I can’t believe it took us this long to experiment with this!