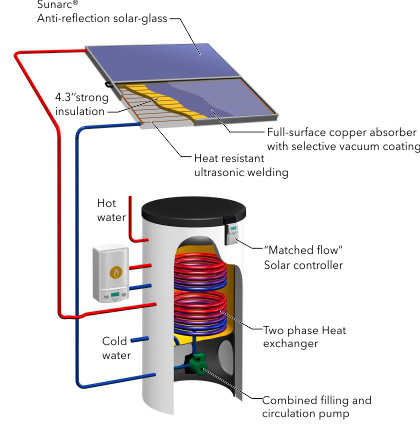 After too many estimates but wonderful and very instructive conversations with installers, we have committed to going solar for our hot water. We got our shade report that tells us that our solar effect of 95.35% qualifies usÂ for the State rebate (minimumÂ requirement is 75%).Â Our solar fraction is 73.1% which means that solar will provide that portion of your hot water on an annual basis, but this is calculated on the average hot water usage here in New England, so I’m sure we’ll do even better.

Our greatest delay was figuring out what to use as secondary backup. The most straightforward was to run two heat exchangers through the hot water tank: one to the solar array, one to our oil-fired furnace. Obviously we looked into electrical backup alternatives because we have solar PV. These were (1)Â running the second exchanger to an Â (electrical) heat pump, (2) a second, electrical tank, possibly on demand, (3) going with one heat exchanger and one electrical coil. But it turned out that our overproduction would possibly not cover the secondary energy needed and might even tip us over quite a bit. So after all that research we are sticking with the oil backup. If later on we want to change to electrical, it will be easy to refurbish.

As for more details: It’s a drain-back SECUSOL system, made by Wagner, with two flat-plate collectors and one 92 gallon tank. The installer is applying for a monitoring system (which the State would pay for), but as this system has already been monitored (and gets the highest rating), there is only a slim chance of getting it. Would be neat, though: we love data!