I had an interesting day yesterday. It didn’t start out promising. My car had failed inspection the day before and needed fixing, so I was dropping it off in the next town over, at Mike the Mechanic’s. Â It’s not like Mike the Mechanic has an inviting waiting room or a replacement car service. It’s just Mike, who was supposed to retire fifteen years ago but forgot. So I walked five minutes in the weirdly warm wind to the library around the corner. It opens at 10 am and this was 9 am. The sky was slate grey and promising rain, the wind was laced with a chill. Across the street from the library is the Natick Town Hall. That’s where I headed.

When you enter the Town Hall there’s a short vestibule before you pass on straight into the guts of the place. It was too busy there, with lots of chatter and phones ringing. I had brought three books and my journal, knowing it would be a while before the car was diagnosed and cured, and I wanted a quiet spot. So I made myself at home on one of the wooden benches lining the vestibule. 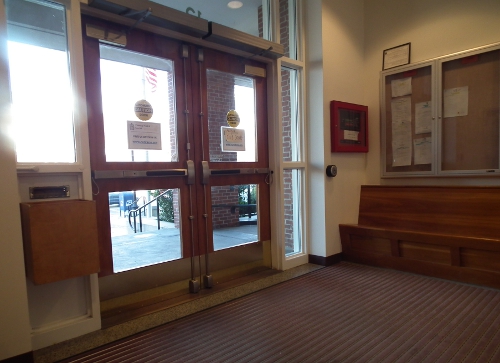 It was comfortable enough, despite for the occasional gust of wind as the doors opened as people came and went. It was the last day to pay the taxes and the water bill, so it was a busy place. I didn’t mind the people, and it became an easy thing, to look up each time someone passed, make quick eye contact and smile, even answer the occasional hello. In my journal, ever open on my lap underneath my book to receive my running commentary, I wrote “Hello people of Natick! I am your Â Town Hall Greeter!” It felt right, in that transitional place, and it didn’t disturb my concentration.

But the left one of the two doors was very noisy, closing with a bang, then a rattling shudder, then a final bang.Â I thought to hang a note of sorts to direct people to the right, silent door. Then I realized what a great opportunity this was for an experiment. So I endured the noise for another half hour and wrote down how many chose the left, how many chose the right door. To these passersby, which door they chose had no consequence: by the time the door closed – slowly – with a bang, they were long gone, outside or in. I tried to see if there was a logic to their choices: if it was perhaps the lefties who chose the right door, but no, for that first half hour, thirteen Â people chose the right, thirteen chose the left. 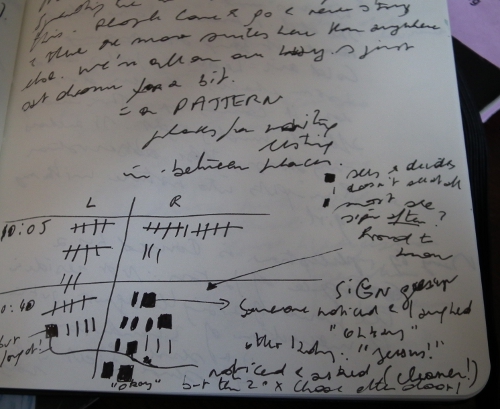 Among them was a man in his mid-thirties. He came in and quickly came out again, carrying a greenÂ certificate with a golden stamp on it: wedding, birth or death. By then the storm had broken and sheets of rain were blowing through, the flag right outside the door was whipping on its pole. This young man had on a t-shirt (the wind was blowing out a spell of balmy air) and had no bag or folder. He saw that his certificate would get spoiled if he ran for his car, so he sat down on the bench across from me to wait it out. He started doing things on his phone. Â Here is some of my commentary:

He only has a phone. Is he reading email, checking Facebook? I feel for him. I want to offer him a book. I could lend him the Greg Bear sci-fi novel… He seems so naked without something REAL for his mind. He seems to get more antsy and upset with each flick of his thumb. It makes me appreciative of a day like this: away from my desk and “a connection” (reminder: quit Facebook!). To be disconnected and with myself for a bit, read a book in this in-between place.

He left. He glanced up from his phone at the rain that had died down, stood and left (using the left door). He didn’t hold the door open for the elderly lady who was coming in just as he left. He seemed nice but it shocked me. He is probably nice but was lost.

Time to hang my sign. It was not obtrusive, but at eye level for most, on the right door.Â By the time I hung the sign it was forty minutes past ten, Â but I was having too much fun to exchange this rather drafty place for the warm and quiet library. 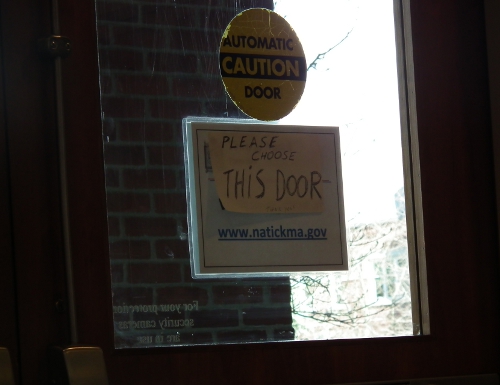 Of those who chose the right door (THIS door), only very few (13 people) obviously didn’tÂ see the sign. Â The majority did see it, but it was hard to tell whether they saw it before or after making their decision (they are the bold stripes: 11 people).

Those represented by the blocks are people who noticed the sign and let it guide their decision. The two aforementioned Â people clearly saw it and decided to take the other, the noisy door anyway, and I suspect the same of two more people. Seventeen people chose the right door. Many of these stopped, read the sign out loud to themselves (or to me as they were vaguely aware of me), laughed or shrugged and said “okay!” Two people got very confused, became torn between one door or the other, and eventually chose the right door. Only one person asked me about it, and I told him the reason for the sign (both the noise and the experiment). He appreciated it all. He turned out to have come to clean these doors. He chose the right door to go out but on the two later occasions he went out, he said a happy hello to me but took the left door anyway! 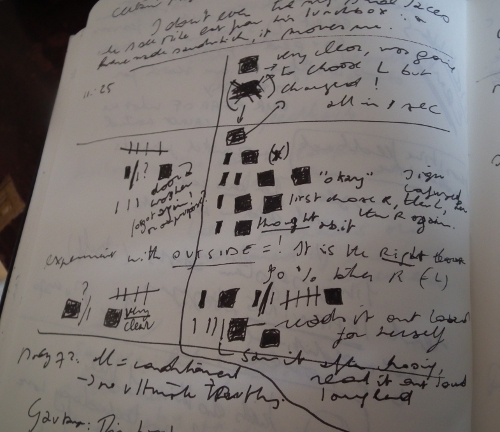 After the sign went up. thirty-seven people chose the left door, forty-two the right one.

All this was a little naughty but well concealedÂ inside joke on my part. The book on my lap was about free will, choice, conditioning and predetermination Â in so-called “open systems”. Every time someone followed the request on the sign, “Please choose this door,” I smiled because they helped my out by not making noise, but also because Â they exemplified my on-going struggle with free will. Did theyÂ reallyÂ choose? Or had I, by hanging the sign, taken away their choice? What sort of choice was that, anyway? What does it mean, to choose? It means a lot to me, and I’ve not yet figured any of it out.

My cell phone rang (it’s a ten-year-old model, even texting is far from straightforward). It was Mike the Mechanic. The damage was $270 and the car was ready. It had stopped raining. I said goodbye to the good people of Natick, knowing what I could do next time I found myself in the neighborhood, or any neighborhood, with a couple of hours to spare. 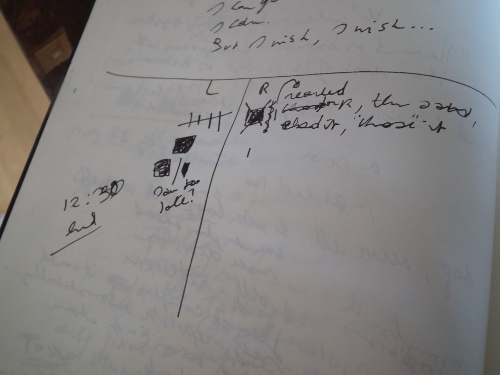