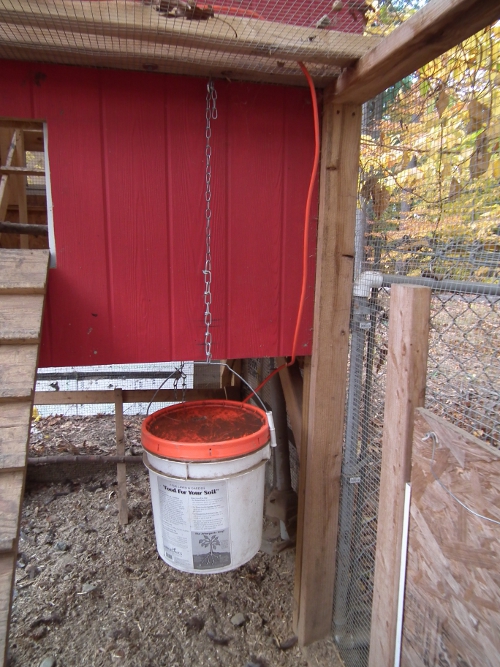 Today was a glorious day: sunny and nearly 70 F. DH and I cleared gutters, raked leaves, cleaned up the porch so it is ready for another row of firewood, and generally tidied up. The only thing I didn’t get to do was plant garlic. But I did get to install the de-icer in the chicken watered.

I have and absolutely love the Avian Aqua Miser: three nipples installed in the bottom of a 5-gallon bucket. Last month, I actually won second prize in the Walden Effect’sÂ picture contest (click here Â for the other submitted photo). I won the new system, nipples that you can install on the side of the container, which allows you to stand the container down, instead of having to hang it. Â I was planning to outfit the new one with heating, but found that there isn’t enough space in the run part underneath the coop, especially in winter. So I left the new system in the box for next year, and retrofitted the old hanging system.

After a lot of research, much of it on the Aqua Miser chicken blog, I opted to go with Farm Innovators’ 150 W birdbath de-icer ($33Â on Amazon). It is thermostatically controlled, seems efficient and built simply enough to last a long time, and it got great reviews.

The next decision was where to make the connection with the extension cord. The de-icer’s cord is quite short, so if I made the connection outside the bucket, I couldn’t lay the de-icer down on the bottom (where I need the heat). Also, to connect it on the outside meant I’d have to figure out rain protection. I fixed both issues by making it inside the bucket, right underneath the lid. I never fill up the bucket beyond 1/3 anyway. On the outside I also guided the extension cord along a hook so this side of the bucket is pretty well protected from the elements. 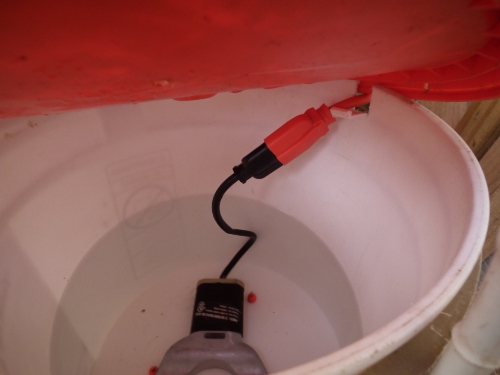 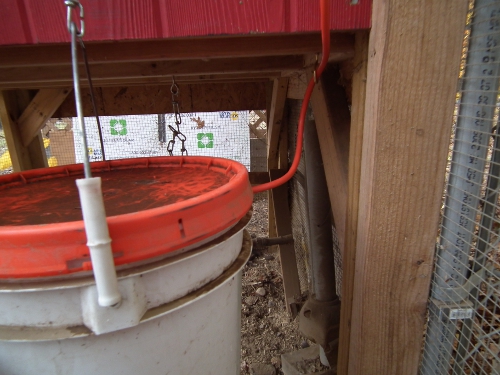 Being so careful with our home-produced electricity, I am a bit concerned that the de-icer will work/consume more than necessary. One case of that would be if the thermostat failed. For that case I’ll add a Thermocube ($13 on Amazon) on the other end of the extension cord: it’ll turn on at 35 F and off at 45 F. I’ll monitor how all this works.

We’re looking at a couple of nights in the 20s next week, so that test will be here soon.

{UPDATE: it went down to 12F last night and this AM, still 9F, the water was not frozen. So it works!}