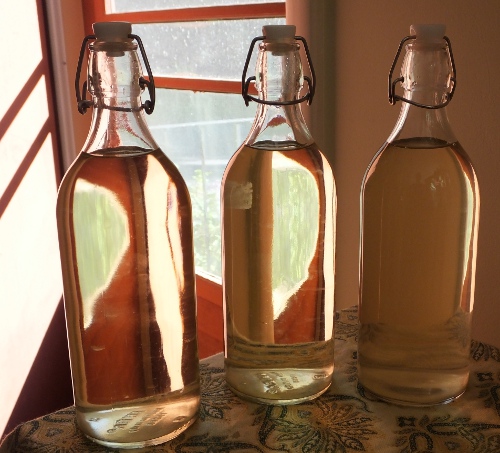 This mead is done! It was made with raw honey and champagne yeast. After more than a year in the carboy, I bottled it. It is quite dry, with that typical, somewhat surprising mead flavor reminiscent of honey. it can age some more in the bottle. Look how clear it is, compared to the next batch! 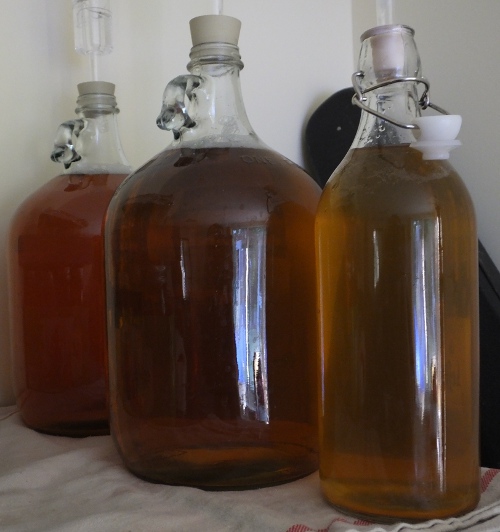 I also racked the two 3 gallon carboys that I put together with the winterkill (hence pasteurized) honey at the beginning of August. One went into a fresh 3 gallon carboy (not pictured) – I had to top it off with brandy, since after leaving the lees (thick layer of dead yeast at the bottom) I no longer had 3 gallons. The other one went into two 1 gallon carboys and the leftover 3/4 gallon went into a bottle for immediate consumption. These are obviously very young and the taste isn’t as developed yet, but I hope after this thoroughly oxygenating operation, they’ll start up again. If they do, I’ll select one or two to add fruit. If they don’t, I’ll make one into a metheglin by adding spices. They’re sitting on my bedroom dresser, so I’ll know if they start bubbling again soon.