On the very last day of the old year, about an hour before they closed shop for their New Year’s Eve, DH and I walked into the Volkswagen dealership and bought a brand new VW Jetta wagon. 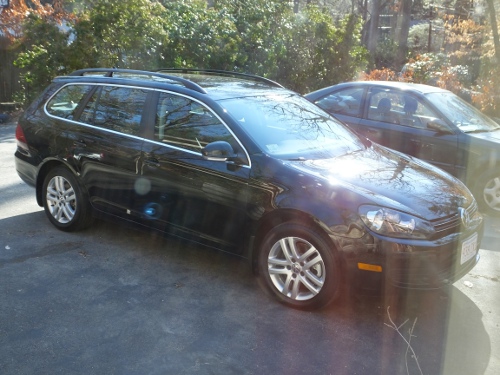 It was a surprise to myself as well, since we are thorough second-handers. The idea had been to replace our cars with one new (see below) and one second-hand one. However, the second-hand car market in this area is ruined: it’s all dealers and their prices are highly inflated. Individuals sell cars with high mileage and getting on in years. After DH’s car being towed twice in a week, the risks were too steep, the assurance with a new car too enticing. And this dealership had a great deal – ending on December 31!

It’s a diesel and is supposed to get 40 mpg on average. DH has driven it to work and back (his shuttle stops over the holidays), on the highway and in downtown Cambridge, and he’s barely made a dent in the tank. The nifty on-board computer tells him he averaged over 50 mpg. Compare this to his 1998 Volvo, which barely got 20 mpg!

My car will need replacement too – it’s as old as DH’s, though it has held up better. We are waiting for Chevrolet to announce the new Volt: it might be a five-seater, have a better engine, and be cheaper… worth the wait. Our home school plans include a road trip, and though our VW would be up for it, we’d rather have an even more efficient car.

Ah, the dreams of the road trip! Our friends who were here over the holidays are in on it too. We’re thinking the Crooked Road…