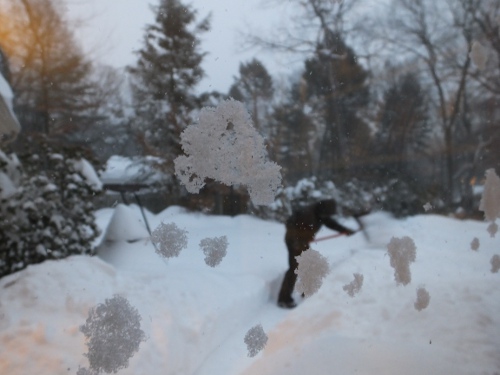 Another foot and a half of snow fell. Luckily the band of sleet and freezing rain south of us stayed south of us, a huge relief, because though it was again light, fluffy snow and so easy to shovel, it was co-old. By the time it stopped snowing and it was good to go out and shovel, the temperature had plummeted to 7 F (-14 C). The sharp wind made that even more uncomfortable. I shoveled a path down to the cars, then handed my warm boots and gloves to DH to dig out the two cars. The worst is the wall of compacted snow and slush that the snowplows inevitably push onto the bottom of the driveway. It’s getting dark now, but if we don’t get rid of that, it’ll harden over night and we’ll have to hack and chisel our way out.

We had another snow day. I think Amie read for over five hours, all in all today. The chickens are holding out fine, though they’re looking a little worse for wear. Hopefully we’ll catch a little break after this. It’s a great feeling to put on one’s winter gear, take a couple of deep breaths and step out there. But not much of that heroism remains by the time one comes back in with frozen fingertips, an aching back and ice on the lungs.