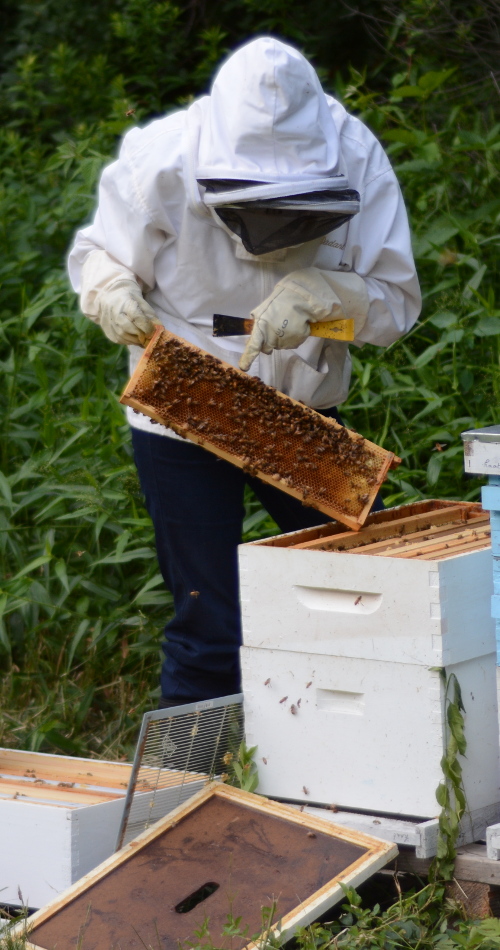 Turns out Dan of Warm Colors Apiaries sent me two Russian queens, so I didn’t have to choose between replacing Laura (Hive 4) and making another split (Hive 7-to-be). I could do both!

I went into 4 and found Laura where she usually hangs out, in the top box. DH stood at a safe distance and played with his new lens. It’s amazing. Here I am pointing to the queen. Zooming in, you can easily spot her. 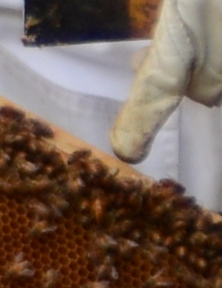 I checked all the frames looking for eggs (very few), another queen (it’s not uncommon for there to be two queens in one colony), and queen cells, of which there were many, full of fat larvae. A sure sign that the bees too didn’t like Laura much. I tore out the queen cells because this colony hasn’t had a laying queen for too long already, picked up Laura, said sorry, and pinched off her head.

I also made a split with five frames of brood, honey, pollen and bees from hives 2 and 3. The weather was chilly (only 65F) and threatening rain, and the bees were all home and not liking it. Still I forged on, since these new queens were being held over with a couple of attendants, a small sponge of water and a dab of honey in a paper bag in my basement.

The splits come to my home bee yard, where I can keep a closer eye on them and baby them a bit more than the big colonies. The lid of the nuc box in which I move bees has warped pretty badly, and despite extra strapping and screws, it turned out that there was plenty of bee space between box and lid. As I was driving (bee jacket and gloves on, but hood down) I looked behind me and saw that twenty bees had escaped and more were following. This is no reason for alarm as long as you keep moving so the bees stick to the rear window. When we pick up packages, there are always stray bees, though perhaps not… thirty of them. Unfortunately I found myself situated behind the oldest lady in the oldest car in the state of Massachusetts, and she paid homage to every red light on the way. Yikes! The woman who was driving behind me certainly was alarmed. She even honked to alert me and I gave her a white gloved thumbs-up. Luckily it’s not too far, and I got home without incident. I went in and squished the ants in the other half of the double nuc, then hived the split.

The next day I queened them: Katharina in Hive 4 and Anna in Hive 7. I taped over the sugar plug of their cages to give them extra time to get accepted, but the bees’ initial reactions looked good. Today I went in again to take the tapes off. The bees will eat through the sugar in a day or two and release their new queens. I will check for eggs in a week or so.

Not to count my chickens before they’ve hatched, but here’s the queen count anyway: three Italians, three Russians, one Sam Comfort Mutt. 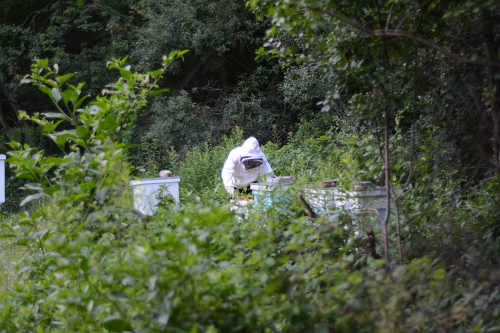