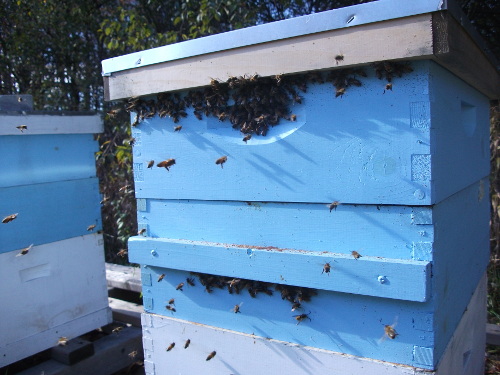 robbers trying to get into the top entrance (closed)

The robbing at the Common Yard continued, relentless. As soon as I had removed the robbed-out Borgia hive, the aggressive colony started on the next one down, the Constanza colony. A fellow Common beek alerted me and I ran over and closed literally all entrances to all my hives. Hives 3 and 4, resp. Beatrice and Katharina, were holding their own very well, thank you, but it was cold enough for them not fly out anyway. Only these crazy robber bees were flying vigorously (bellies full of honey).

The best was when the owner of the robbing hive showed up. What good timing! He said that, after it requeened itself, his hive (his one hive, he’s a first-year beek) had been a nasty pain to work. They were indeed very aggressive to bees and beeks alike. He suggested, himself, that he should have got rid of that queen, but now it is too late in the season to requeen, so the unfortunate tentative outcome was to lock up the and soÂ  kill off the whole colony. (If anyone objects, let them come over and I’ll even give them a suit and a smoking smoker and let hem open those boxes! Gentleness is most often the first, second or third criterion in a good queen, for the beekeeper as well as the public’s sake.) Luckily another Common beek offered to help him move the colony to the owner’s yard, and then the owner can requeen in Spring. It’s a little over 2 miles away, so I hope those bees don’t find the Common Yard and keep on robbing!

Anyway, too late for Constanza. With the culprit gone today, I was able to open her up and found she is also a goner. There was no queen, only a handful of bees left, not even enough to combine with a strong hive. But a lot of honey, at least 13 full medium frames and 3 full deep frames. Uttering a little apology, I shook the bees out into the grass and locked up the hive. I’ll distribute the honey frames to the other hives tomorrow when it’s warmer (65F!).

I also opened Beatrice and Katharina’s houses and especially Beatrice, the last Italian, is strong: big population covering the bottom deep and two supers and lots of honey. Katharina has fewer bees, but then again they’re Russians, which overwinter with a smaller population. The last hive at the Common, the Russian Tatjana, looks good too, but they’re the adolescent split, occupying only a deep and a super, and I may just give them the super full of honey from Constanza’s leftovers.

Of course, Constanza and Borgia were well-populated, vigorous, honey-loaded hives too, until a couple of weeks ago. So now I’m down to four. I started with four. How many will I have after winter? I bow to the meadow that holds and feeds my bees. May she hold and feed them into the next season.