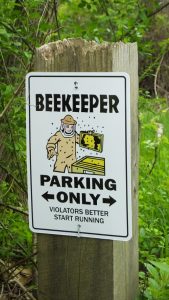 My inspection of the big Sam hive in my Home Yard revealed a massive population occupying three full mediums and getting honey bound or rather, egg bound. Capped brood was intermixed with nectar, though not much. Possibly whatever is brought in and processed is instantly consumed by this massive population.Â  The weather has been conducive to lush plant growth: rain and sunny days and the wildflowers at least are happy. But not the bees. On the rainy days they can’t fly out to get the bounty, and beekeepers are reporting the loss of the first honey crop, for starters. It’s also been hard on queen rearing. Though there are a lot of drones, and this hive had drones galore (it’s a sign of a strong colony that they are willing to support that many drones), the virgin queens can’t fly out to mate in rainy weather.

But here now was an opportunity: I found tons of swarm cells in the making, with around twelve of them occupied and being filled with royal jelly. This original Sam Comfort queen is too good to lose to a swarm, as are all her queenly off-spring (the first new queen that hatches kills off all the other ones). Time to act!

In a rush to get this fixed before cold and rainy weather was due, my option was to go in on a heat wave day. I waited till the bees started flying (not wanting everyone home – I did want to find the queen in there) and already it was too hot. Subconsciously I must have thought, “Hey, let’s not close this suit all the way!” Great idea, subconscious! Too many bees got inside and stung me in the neck and throat and in my scalp.Â  It’s the worst when they’re trapped in your long hair and you have to grab them with your gloves and squish them. I ran from the hive, which was wide open by then, stripped off the suit, ran inside (somehow having lost any pursuing bees), pulled the still living bees out of my hair and from my neck with tweezers, then pulled the two stingers that I could see (of the seven), popped two Benadryl, threw on the suit and gloves, ran out again and closed up the hive – during which operation they stung me twice more, in the leg (a doozy!)

Now this was truth time for me. I have bad local reactions to stings which hurt for days, so I am a very careful beekeeper who had not been stung for over two years. Who knows what my reaction would be! I lay down, watched the hives break out all over my body, then after a minute recede again as the BenadrylÂ  kicked in. That stuff makes you sleepy, and it was so darn hot, but I kept myself awake for an hour, monitoring the swelling. Then I took a long nap. All in all it was a good experience: now I know I can handle that many stings, albeit with some medication, and that my beekeeping career can continue. And I got right back on the horse again.

On my next try it was cooler and I took care to fully zip up the darn suit. It was also a week later and I found many closed swarm cells.Â  I pulled two frames, each with two closed cells, and stuck each in a medium for a nuc, along with a frame of brood and a frame of honey, some drawn comb, and bees. And no queen, of course. Had I spotted her I would have done an artificial swarm (moved her), but she was not to be found. I’m sure she was still in there, though. I could spot a few eggs (not many).Â  I also stuck a frame of brood and a frame of honey in a small nuc box and shook in some bees (again, carefully looking for the queen).Â  A friend had given me an extraÂ  Russian queen in a queen cage, and she would be their new queen.

The bees were very mellow. I love this hive, so prolific, well-organized, and friendly (except when trapped inside a suit with a human, and in her hair). I brought all these guys to our Common Yard. Here they are to the left of the two Russian hybrid packages, one of which is pulling ahead of the other. I actually pulled a frame of open brood from that 3-medium one to give to the nuc next to it.

The queen in her cage went into that cardboard nuc box. I kept that box closed up so the bees inside couldn’t get out. Released them the next day. They were feeding her but had not yet released her.

This was all from the top medium box of the Sam hive and there were still at least 6 closed swarm cells in just that box! I asked my friend Arthur, a much more experienced beek, for advice. He came over the next day – chilly, drizzly – and said, “Let’s make more nucs!” He had brought a medium queenÂ  castle for three more nucs with one queen cell each, and one 5 frame medium nuc box which we packed to the brim. These too went to the Common Yard: 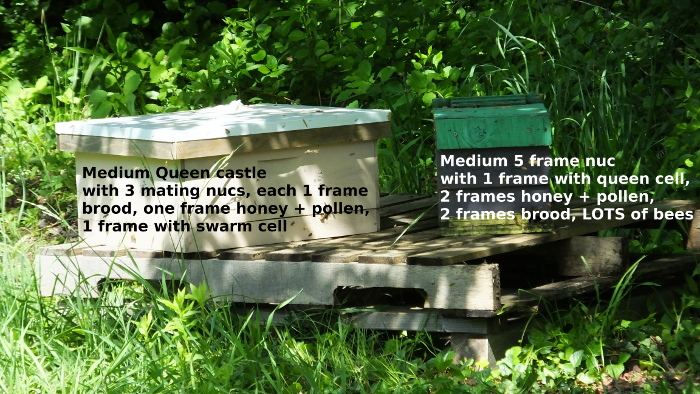 The leftovers stayed home, with one more closed queen cell and one open one. But we suspect the old queen is still in there – I’ll know for sure tomorrow when I check on them. The Queenless Roar will tell me.

So now I suddenly have twelve colonies:

We don’t expect all of those virgin queen nucs to make it.

Arthur was very impressed with these bees and proposed we breed from Sam (if we find her) or from any of her surviving daughters. More fun to come!