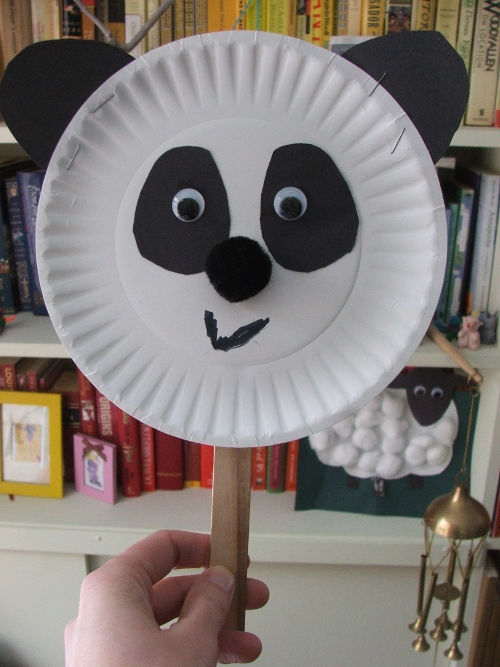 I has just reread Lori’s Observational Drawing Lesson on the Camp Creek Blog when I looked up and spotted the perfect occasion for such drawing: Amie sitting at the table, waiting for her grandparents to appear on the troubled webcam, paper and pencil, and a panda bear mask she made in school. Okay, I thought, let’s practice seeing!

Lori advises to start with something simple, so the panda bear mask is perfect.

To focus on shapes and later on on details, Lori says to use only a plain pencil. Amie has always had recourse to lots of colors, but for drawing she always chose just one of the bunch, so moving to a pencil was no problem for her. The only problem I have with plain pencils is that they don’t scan in very well, as the graphite reflects the scanner’s light.

Amie was so interested in the exercise that she wanted to do a second drawing right away, even though the grandparents had now appeared on the screen (they were happy to watch). Then I left everything on the dining table so the next day when we found ourselves there, she wanted to draw another one, and this morning at breakfast she drew the fourth. Here they are (click on image for larger):

I made sure we used our words, naming all the shapes and discussing their location respective to one another.

We worked on these drawings together, only I made sure she drew all the shapes, I just helped with the coloring in. I decided, as we were playing with shapes anyway, to add some writing of letters and numbers.

Unfortunately she discovered the eraser at the other end of the pencil. I tried gently to dissuade her from using it: she is already such a perfectionist! But more than often she erased my mistakes. “Your coloring is terrific, but mine is even better.” We’ll call that “confidence”…

Though the fourth drawing shows perhaps the most likeness, it was obvious from how seldom she looked at the original anymore that she was drawing her idea of the mask, not the mask itself. So it’s time to leave the mask and find something else!

This is a great daily exercise. It fills those 15 minutes when you wait for dinner to be set on the table or some computer to work, or while you’re having a snack or chatting.