The Pachy Patch in Summer 2008

yesterday was a perfect summer, spring, winter’s day: cloudless sky, 60F, the mildest of breezes, and some good hard labor. I went out, turned the two defrosted compost bins and then tackled the Pachysandra patch, a.k.a. the vegetable garden. Ah Pachysandra…

It took over five hours of hacking and pulling, getting down on my knees to pull out each and every root and dumping wheelbarrows full of the stuff in our growing “brush” section (or should I compost it? All that green…). In the end my hands were almost no longer up to peeling all that  tape off the cardboard boxes. We saved these boxes from our move and big purchases last summer with exactly this in mind: to protect the suddenly exposed soil from the wind and the rain. But the tape was still all over them, so we peeled and cursed as the sun dipped further behind the horizon and a brisk wind came on. We loaded the cardboard with some of the big stones that also came out of the ground. We should have watered them down too, but then it is going to rain and sleet this evening, so why waste tap water?

This now was mostly me, as DH was busy putting out cold frames together. Once in a while Amie would come to help with her little rake, but most of the time she played by all herself in her play set or just exploring the garden, mumbling a a dialogue to herself. I looked over at her often, and knew it in my gut, that that is what we came here for: Amie telling stories in the garden.

So I had time to think, to write stories in my head. There was an incredible clearness that came with the hard work and the cool breeze. I believe it now, that gardener is good for writers, for people in general.

But my particular train of thought was precipitated by a neighbor stopping by to remark: “Mm, Pachysandra. You’ll never get that out, you know.” 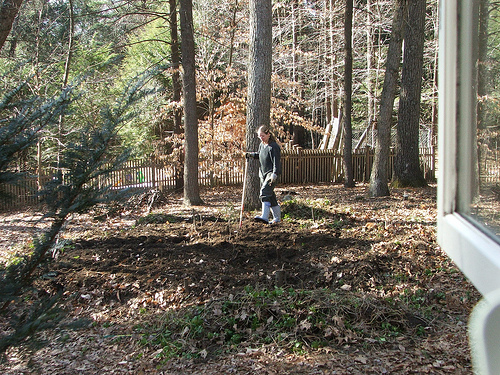 “Yeah yeah yeah,” I went in my head after her had left, “did I really need that?” This was followed by retakes of all the avowals, by friends and strangers alike, that this would be difficult, as we have no experience, and it will be very hard work, and we’d get tired before we got anywhere, and did we know what we were getting into, etc. etc.

Why? Because it’s my nature? My upbringing? My culture?

Then I laughed out loud, the rake (by now one twine was bent up) in one hand, one of those pesky roots in the other. I had just realized something else. You’re going to laugh too, but here goes:

If you are passionate about something, you can do it.

Second, the novel. I finished that book – baby/toddler in the sling – in a year and a half. Why did this succeed? Because I made short thrift of it. There was very little time for doubt. The idea of not finishing it, of it being hard work never crossed my mind. I just did it. My first agent’s response was a rejection, but it was incredibly encouraging – indeed the best rejection a first-time author could hope for. Once I’ve found the time to follow up on his advice, I could sell the thing.

Listen to me! It’s a new me! The novel has shown me that I can do whatever I set my mind to.

So this garden project now. There are many reasons why I am doing this: food for my family, food for the community, physical and mental health, preparation for an uncertain future, a wholesome life for my daughter… Yes, I know I have no experience. I know there is a lot of shade in my garden. I know it is and will be hard work, and a frost might wipe out all the crops, and our chickens will all eventually die, being animals likes us, and I won’t be able to go on a long holiday in spring, summer or fall. And I will have missed some of this here Pachysandra and it will grow back and I’ll have to weed it again…

I have thought of all these things, you know. And whenever I’ve voiced them to my DH, he said (though maybe not in so many words): So?

And he’s right! I’m not afraid of hard work.  I always do my homework. But most of all I’m passionate about this, and no one – least of all me – has the right to trample over it.

Then I said to myself, as I bent to my Pachysandra again, that if this works for me then it will work for others, and I am the first one who should make a change. As of now I will encourage my friends and family no matter what their passion is. I will nudge the doubter aside and say: “Now wait a moment, I can see it in her eye: I have no doubt that she can do it!”

And with that resolution I resumed my hacking away at the last Pachysandra. I could see in that liberated, humusy-dark and lively soil our garden growing.

Today it’s coming down, a flurry of almost melting snow on the Pachy Patch in the Winter of 2009: