It’s been a while since I reported on Amie’s art work (she just turned four). Since the burst of creativity when Amie’s grandmother was here, she has been more interested in imaginary play and playing outside. Lately though she has been sitting down to draw for long stretches of time, all of her own accord. It pays off to have all the art materials freely available – even though it is annoying to trip over them once in a while. On the flip side, there’s always a crayon when I need a pen! She also always brings a little book and a pen so she can draw in the car or cart (in the grocery store). 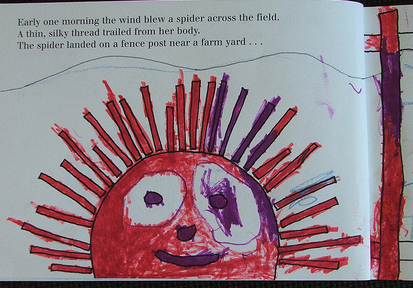 There have been several developments. Amie now likes to do coloring in – not an exercise in creativity in my book – and has started paying extra attention to staying within the lines. But she soon tires of it and moves on to a blank piece of paper, the bigger the better.

On those big sheets she often draw not just “things,” but happenings: events, actions, contexts, interactions, and relations. I had been planning on gently prodding her into taking this next step, but she took it all on her own.

She asked me to annotate the two following drawings, which were made one after the other. 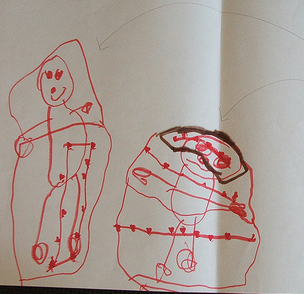 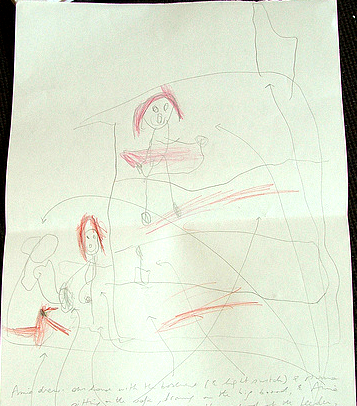 Dictated annotation: “Amie drew: Our house with the basement (& light switch) and Mama sitting on the sofa, drawing on the big board, and Amie on the balcony feeding the hummingbird at the feeder, and the chimney.” (sorry for the bad photo: my scanner’s fried). 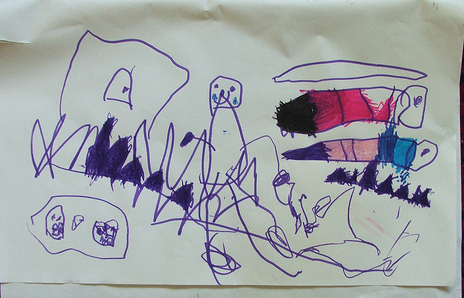 There are a lot of stories in the drawing above, all related to a day in the garden. There’s a lot of grass and two big earthworms – she was in charge of a big bin of all the earthworms we found while raking our yard when sowing grass seed. A girl is watering the grass and the flowers. There’s a crude house. There are two scary faces (securely boxed off, in the lower left corner) – which are part of the Farmers Market decorations these days.

She usually does this kind of drawing fast, with little attention for details. It’s all about what is happening. Sometimes things happen so fast that this is the result: 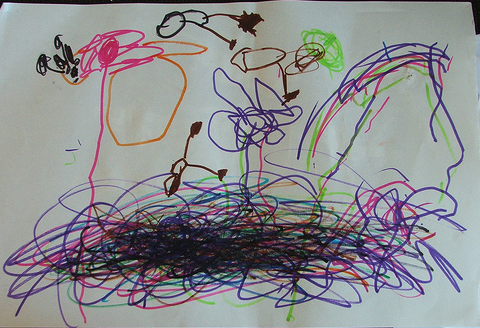 Or events get overlaid on each other. The next drawing is of two girls underneath a tree. The one on the left pulled down a branch and leaves and dirt fell into her hair, so you can no longer make out her hair and face: 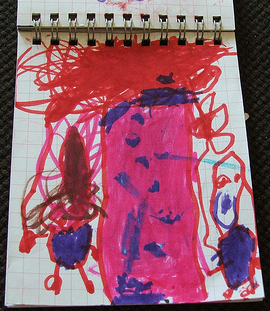 As she draws these she often tells the story out loud – Amie is always the narrator, she often includes “she jumped up”, on top of the action, and even “he said” for dialogue! In these instances she’s not concerned with the result, only with the act of putting it down, seeing her story unfold on paper.

At other times, however, she is very deliberate about the result. Then she  pays special attention, for instance, to the spatial relations of things in a drawing. These houses, for instance, she drew partly with a ruler – she is so proud of herself when she makes that straight box. 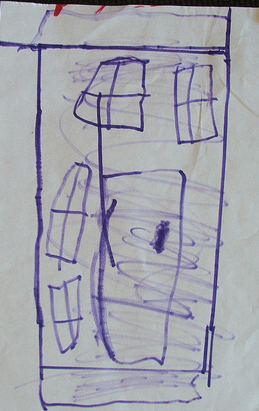 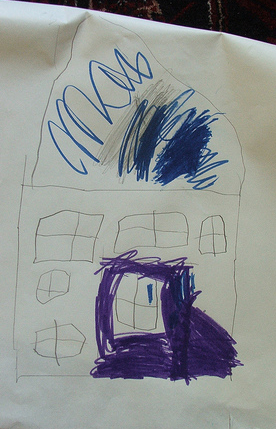 And yesterday she was quiet for a long while, then ran into the room and showed me her drawing and her model: 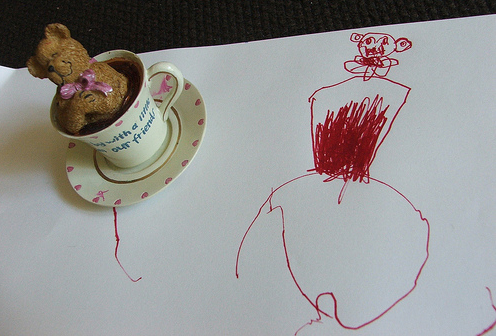 She had drawn the saucer by putting it down on the paper and tracing it. And she proudly said: “I drew it exactly, Mama. But I didn’t like the way the bear’s mouth is all squiggly, because he doesn’t look happy, so I drew his smile straight not squiggly.”

To while away the time she also sits down with her little book and draws “I Spy”. She spots something, says its name, then draws it, laying it out on the page. When the page is full, she moves on to the next page. The next drawings are of the things in the bathroom, made while I was taking a shower. She has learned Dan Price‘s advice: You will never be bored when “making lines”. 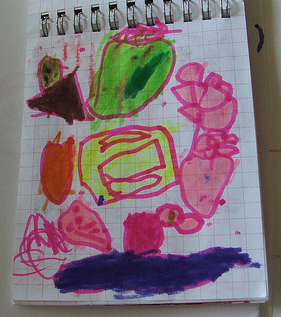 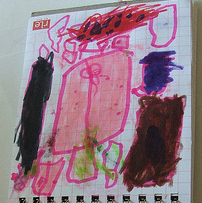 You can see how colors are gaining importance for her. A while ago she drew this parrot – I just love the way she got those wings right, and the beak – and then she asked me to put a little colored cross in the parts so she could color it in properly. She was extra mindful of the head part, careful to leave the white part blank. I can’t find the finished drawing, when I do I’ll post it. 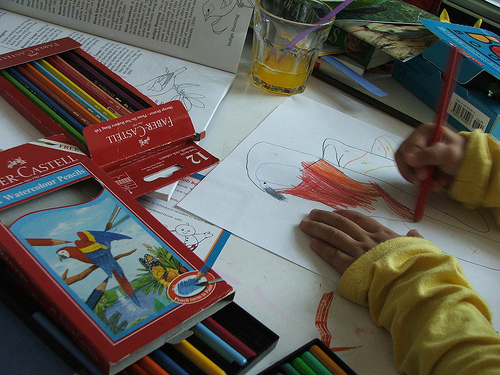 And look at these while-away drawings of her cardboard castle/abbey. The colors are so intense! 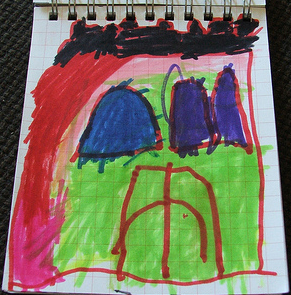 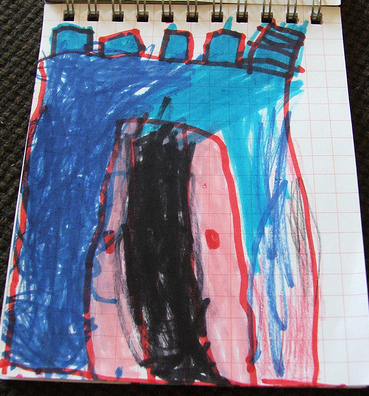 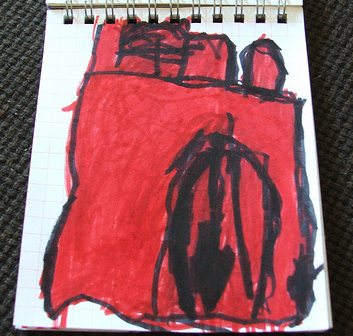 You can follow the development of Amie’s drawings in the “Drawing as It Develops” series (and I finally got round to updating the list of relevant entries).