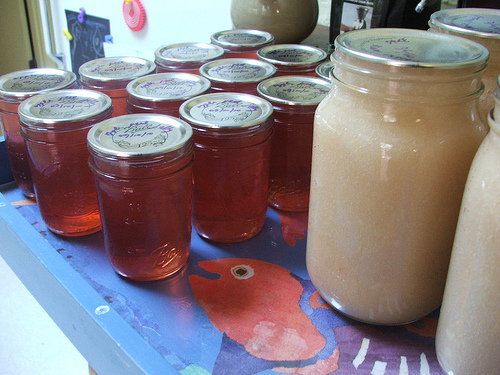 I was talking with a friend today and she mentioned my picture a while back of my canning pantry. She said she certainly understands the feeling of growing, harvesting, putting up and getting the firewood ready from her reading of the Little House on the Prairie books – which I admitted I have never read (all gasp), as it’s not quite part of the European schoolgirl’s library, and as I simply never felt the need to read it after my school years. She told me that especially the ritual of putting up always gave her a sense of security, and how had she lost that feeling?

I said when you live according to the seasons, you live according to the ever recurring year, with its waxings and wanings, its rituals of life and work, its periods of plenty and of less, and its ample pockets of security in rough times… A life, in short, that can count on certain comforts even if they’re not present, because the recurring rituals hold them in place in the future. This gives you a sense of security without however lulling you into a false sense of security. Because it is a whole year, it doesn’t get boring, and the periods and transitions within it cannot be taken for granted.

This unlike “modern life”, which lives not the recurring year, but the recurring day, over and over again the same day, with (as per usual at least) not a one big shift, whether gift or sacrifice, to make us feel alive and the passage of time.

This friend understands what I’m trying to do here, and I appreciate our conversations, however interrupted by kids and “modern life”, more than she knows. I hardly ever write about the emotional side of our endeavors and dreams on this blog, I don’t know why. Perhaps I fear of the dreaded “No Comments” under the entry headings. But most of the time, it is simple exhausting to try to get the maelstrom of emotions to stay still on paper/screen, in neat sentences let alone paragraphs. Easier to let it all come pouring out as a warbled stream of consciousness into the ear of a dear friend. And, later in the evening, to salvage a few choice thoughts.