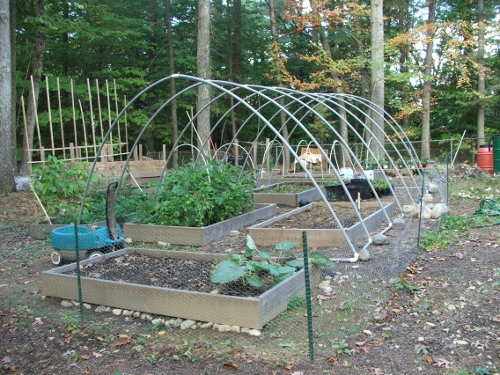 Over the long weekend it took us – two adults versus one four-year-old – to set up the hoop house PVC frame. Initially we thought that the simple hoop house might not be high enough on the sides for the taller plants, like tomatoes, that we want to grow in it in summer. So we wanted to make a box with an arch on top, but this involved specialized pvc connectors that we would have had to order online and pay big bucks for. Once it was up, though, the height at the edges doesn’t seem much of an issue, especially if I grow the taller plants in the middle. (These pictures don’t show the door structure, or the reinforcements – don’t want to take a picture in the current rain). 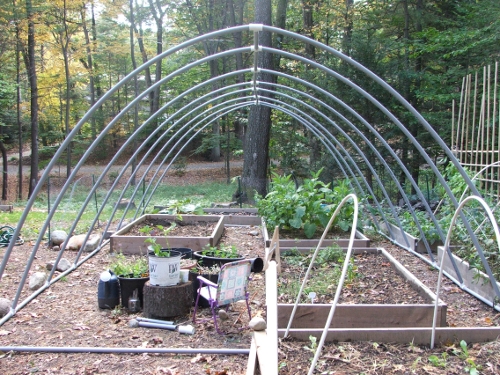 Amie loves it, that big ribcage in the sky, a building yet not a building.

It will cover three beds and leave room for a bin with compost – which we’ll need and which will have to be kept somewhat unfrozen – and several container plants, and tools. We’ll work on putting a bed there in the Spring. We’ll put lots of straw all around, and stack bales on the north side. 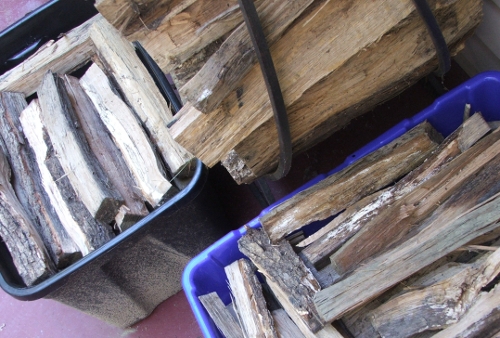 This picture of risa’s kindling box got me outside splitting some of the larger logs into thinner logs and kindling. DH came out to look, and again with the commentary! But I’ll get better at it, with a stronger body and tougher hands and a better aim. Amie understands that, about practice. And besides, even though I’m not especially good at it, I enjoy splitting firewood, inordinately.

DH will be gone for 10 days so I will have to tend every fire – the oil furnace is on standby for nights (at 58 F) – and make sure there’s enough wood. I’ll also be the one draining the rain barrels and stashing them away – we have a frost coming, soon. I’ll clean up the rest of the garden when it stops raining and cover what is still growing with quick hoops and row cover. If the clamps arrive while he’s away I’ll try to put the plastic on the greenhouse myself. I will transplant the Winter seedlings and sow more Winter and early Spring crop.

I will go looking for elderberry syrup to supplement the vitamin D we’re taking daily. I will also start plotting window quilts to keep the draft out in the bedrooms, organize our winter clothes and buy (or make?) flanel sheets and pj’s.

And for peace of mind I’ll call up the farm that supplies the raw milk that is coming this Wednesday to ask how often and by whom it gets tested, and what their milking procedures are (thanks again to Nika). Then I’ll make my first yogurt, and I’ll try butter and paneer.

And maybe I’ll bake some bread…

Winter is coming. It’s the first time I am feeling it so keenly in both body and spirit.