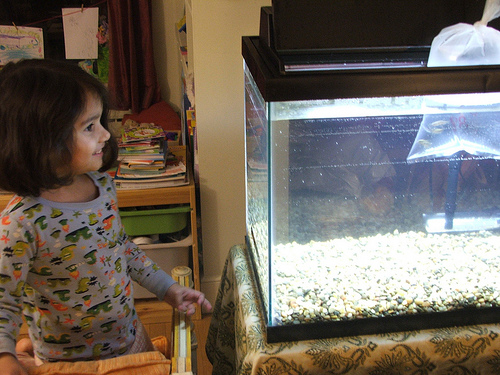 Amie welcomes the first non-human animals on the homestead

I signed up for Bee School (7 Thursdays and 1 Saturday morning) and while I was at it I also enrolled for a backyard chicken class (2 Saturday mornings, maybe Amie can come too).

It took me so long to sign up because I know that the kids living right next door to us (on the side of the property where the beehive would be located) are very allergic to many things. Though I have been told that the neighborhood kids’ chance for being stung by honey bees is minimal, I decided that if the kids are allergic to bee stings, I would can the project. But the neighbors gave us the all-okay yesterday. They’re quite albeit carefully interested in our experiments.

A visit to the wonderful Drumlin Farm chicken coop made me realize that I really have not a clue about chickens. The only chicken I have experience with is the killed, plumed and cut-up kind, raw or cooked. The one or two childhood visits to the relative who kept chickens are long forgotten, and not one of the neighborhoods I frequented in my life boasted the presence of chickens. So, there I was, staring at those beautiful, mysterious birds at Drumlin, and thinking it would be good to at least hold one, just once, before I go ahead and buy chicks. The added advantage to such a class is also that we might all pitch together for a batch from a hatchery.

Amie is very keen on the chickens, and we’ve been reading library books on the subject. Once she read that the unhatched chick finds most of the nutrition it needs in the egg yolk, she also started eating it – she now devours the whole egg. And she started this beautiful chicken drawing: 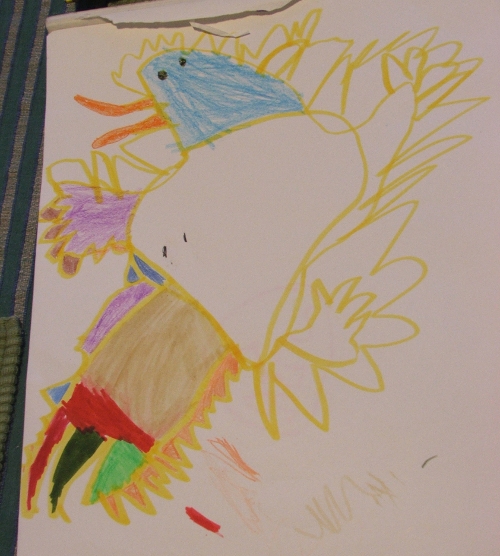 The fish, lastly, were Amie’s Christmas present from several people combined. It’s a 20 gallon tank with, for the moment, 4 Zebra Danios. We had such fun at the store, ogling all the colorful variety of fishes. It was a bit of a comedown when the store assistant told us we should start with a “school” of these tiny little ones, four of them (we’ve learned, in the meantime, that six should be the minimum). Still, they’re fun to watch, and we’ve already learned a lot about fish, mainly that we don’t know anything about them. It’s Amie’s job to feed them in the morning. Just a matter of starting small…

Also, check out this basement garden!