Woah, I can’t believe it. After days of 70-80 F weather, the temperature is plummeting, down down down, to 31 F. Tomorrow will be blustery and chilly, and that night will again see temps of 31 F. 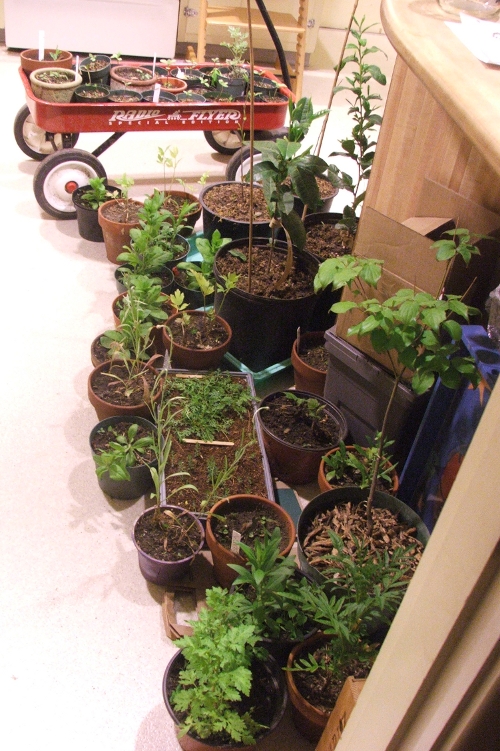 So every plant that could be moved was moved out of the garden and the screened-in porch, into the guestroom and the kitchen – which now looks like a greenhouse, except with dirty dishes in the sink.

The new hoophouse is up (yes, more on that tomorrow), but it doesn’t have doors yet, so it’s a tad drafty in there. I covered the beds with the newly transplanted tomatoes, peppers and eggplants with row cover. The tomatoes will survive, since they were seriously hardened off, but the others are still tiny seedlings.  Ah well, can’t yank ’em back out of the ground, can I? Anyway, if they don’t survive, I have plenty of backup seedlings.

I hope the newly planted trees, bushes, vines and strawberries all survive: they’re out in the open. I’m glad I didn’t get to plant all the other seedlings, and also was remiss in planting the asparagus. Oh, and the mushroom spores.

I hope the bees do alright. They come from warm Georgia all the way to New England for this nasty surprise. I took a quick look this morning and got the distinct sense that the colony is dwindling, which is normal, as the dying bees are not being replaced by new bees yet. They were still good on syrup, which I take to be a good sign, and there was lots of comb, which is an even better sign.  The idea was to do a serious inspection tomorrow to check for eggs, maybe capped brood, and/or the queen (the first would be a sign of the latter). But on a cold and windy day I believe it’s best to not open the box for fear of chilling them.

I made compost tea and fed it to the seedlings though sadly not to the garden, as I found my watering can leaky (something heavy fell on it and split is at the seam). And this evening our neighbors came for dinner and I served a dish with homegrown kale (bolted kale tastes just as nice) and spinach, as well as a salad with homegrown lettuce. What a treat!