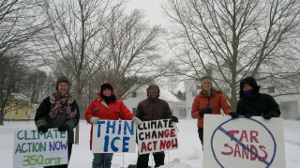 Holding the edge with a bunch of intrepid friends. A  local “rally” in solidarity with our friends marching in Washington DC.  We stayed till I no longer felt my fingertips and toes, and my speech became slurred. Then we had hot cocoa.

This is the article I wrote for the local press:

Waylanders Rally for Climate Change in DC and locally

On Sunday, 17 February, a small group of Waylanders stood on the corner of Routes 20 and 27 holding signs with “Climate Change Act Now” and “No Tar Sands”. They were showing their solidarity with the tens of thousands marching in Washington D.C. that day to urge President Obama to move the nation forward on climate.

“I couldn’t make it to the rally in D.C.,” said Anne Harris, “so it was fun to have our small rally here in Wayland. My hope is to keep climate action in the forefront of people’s minds as we ask our leaders to seek solutions to the country’s challenges”.

The freezing temperature and nasty wind in Wayland rivaled the conditions in D.C., where 35,000 marched to make the largest Climate March in US history, according to 350.org.

Wayland resident Sabine von Mering, who was there, said, “To me this march was a great experience because, like Bill McKibben, I had been waiting for this movement to come about for many years. Since I first came to the US twenty years ago I thought it’s impossible that a country that brought forth the civil rights movement and Dr. King, and people like Henry David Thoreau and Rachel Carson, would fall so far behind Europe in demanding environmental justice and action on climate change. Today at this march I saw the real America, the USA that I love and cherish. People who care that our political leaders listen to our best scientists, people who take a two-day bus ride to make sure their voice is not drowned out by moneyed lobbyists. People of all ages and walks of life who join together saying ‘enough is enough. We must protect this planet. It’s the only one we have’.”

The group at the corner of the Cochituate and Boston Post Roads also had the blowing snow to contend with and, admittedly, not that many bodies to stay warm, but all that didn’t seem to matter. That the day was a typical winter’s day wasn’t all that ironic to Andrea Case. “A snowy winter makes people question ‘global warming’,” she said. “But intense weather, whether blizzards, hurricanes, droughts or repeated record high temperature days, are all harbingers of climate change.”

Asked if this was a successful event, Kaat Vander Straeten, said, “Yes! Look, there were only seven of us, but there was no place I’d rather be. Hundreds of people driving by saw our message, and that wouldn’t have happened if we had stayed home.”

Back in DC, von Mering noted, “There was clearly a somber note to the gathering, because we all know that our chances of winning this fight are pretty slim. Which is why it was so important to see so many of us. Every single person I met today understands what’s at stake. This was a gathering of smart people who care and who want to turn things around. People who are willing to risk a lot for everyone’s sake. I was proud to be with them. I feel greatly encouraged for the future.”