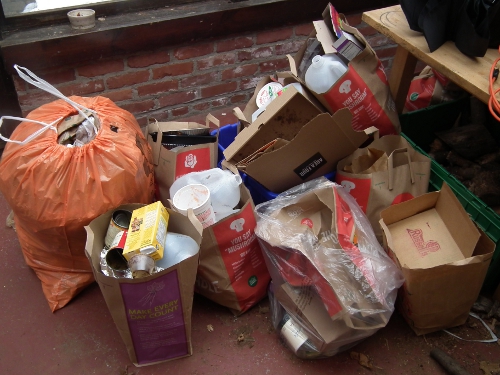 This is (four days shy of) Â two month’s worth of trash: one 30 gallon bag (our town uses PAYT – Pay As You Throw – and these bags cost $2 each, which is still way too little if you ask me) and an assortment of recyclables. Â I didn’t weigh all this before taking it to the Transfer Station, but I doubt it came to 6 lbs. per person per month (the value I usually put into our Riot).

On the way back from the Transfer Station Amie and I stopped Â by our town’s Winters Farmer Market to see the lamb and buy some carrots. We learned that there were also Angora rabbits, which we immediately sought out. Â While admiring the rabbits in their cages we asked questions of the farmer. Another mom with her two-year-old joined, right on time for my next question:

“How long do they live?”

Woah, the look on the other mom’s face! The farmer saw it too and merely gave me a sheet of paper, saying there was a lot of info there. None of it, I see now, about how long a rabbit lives. She told me that after the other mom had left (5 to 6 years, some 9 years).

The death-phobia in this culture is something fierce! We no longer tell our kids Grimm’s fairy tales, because people die in them (the gall!). Taylor Swift scored big giving Romeo and Juliet a happy ending, and the only characters that die in kids’ movies are animals. Â Human characters may die only in Â animated movies. One is no longer allowed to ask about lifespan of animals Â in public because, dear lord, the concept ofÂ spanÂ implies a beginning and an end.

Well, more about that soon. Did you know that rabbits can die of wool block?