The vote is in and it’s a veto: the majority of the Trustees of our condominium have said no to our composting bin idea.

The first one was personally against it, the second one would dearly like to do it herself, but she knew many other residents would revolt. The third and last Trustee, well: that’s me.

It is true, we are already having trouble getting some to recycle their paper!Â Many others won’t even want to be educated on the topic. Also, we are composting neophytes, and there’s more than a chance that we will have stinky bin within a month of starting it.

So that got me dreaming about this place: 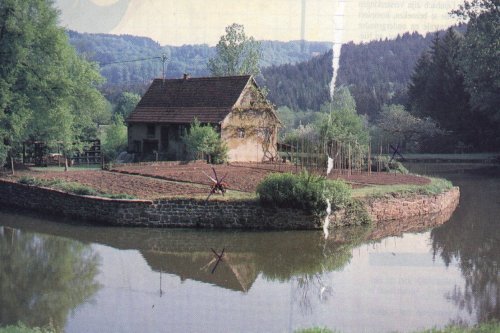 I don’t remember where I got the photograph (looks like a newspaper), and I don’t know where it was taken, but it’s somewhere in Europe, possibly Belgium.

Wouldn’t you want to live there (I don’t mean in Europe, butÂ on this farm)?

I’d be afraid Amie would fall into the river though… One more reason to teach her how to swim!