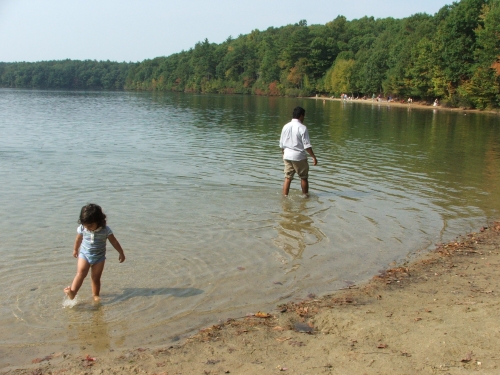 All three of us went to Walden Pond today (Amie no longer calls it “Walrus Pond”). It was 83 degrees F, that’s 28 degrees C! We had not expected it, so we were rather overdressed (long pants).

The pondwater was warm enough for Amie, who has been suffering from a cold, to go inÂ whole. This time we did take care to take her shoes off first thing – but we were too late with the shirt. Her diaper swelled up like a balloon half her weight, but she was unperturbed. She floated and splashed and drank the pondwater (we asked her not to, but what can you do?).

We collected stones and leaves and dirt.

Walden Pond in summer can get very crowded, but as you can see from the photo, today was fine, surprisingly for such a hot Saturday on a long weekend. There were mostly families with children, many of them as unprepared for a swim as we were but goin’ in anyway. It felt rather neighborly.

On our way back to the parking lot we visited the replica of Henry David Thoreau’s house. When we arrived the door was open but Amie wouldn’t go in. The bed, with its messed-up brown blanket, scared her a bit. She said:

A young couple who were also looking in through the doorway laughed and the girl pointed at her boyfriend, saying:

The young man took up the role with ease and gave us a tour of his house: the three chairs, the fireplace, the table and the bed.

And she stared. Was it because he didn’t at all look like the bear in D.B. Johnson’s books? Or did she stare so because she hasÂ a sense of Thoreau’s stature, or of the fact that he’s the past and, actually, quite dead…

Who knows what goes on in that little head of hers. More than we give her credit for, I’m sure!