Have you seen Amie puzzling (video to the right)? She was only 18 months old and really into it: fit-the-shape peg puzzles as well as jigsaw puzzles. After a while she lost interest and moved on. I wasn’t heart-broken, because I knew that by thenÂ she had memorized all the puzzles and wasn’t, therefore, really puzzling anymore. I described all this in First Puzzles for a Child Under Two Years.

Today she asked to make puzzles again. I had to dig them out from behind hundreds ofÂ children’s books (I am not kidding). Two hours later, this was the result: 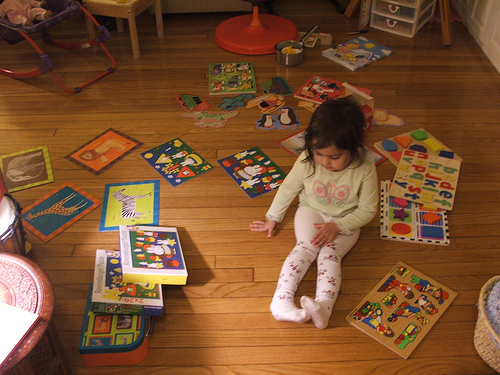 As before, I mixed up the 16 same-shape-and-size but different-pattern pieces that fit into two boards (described in A Child’s First Puzzles), and the 16 geometrical shapes that alsoÂ go into twoÂ different boards. She wasn’t even challenged.

Then I alsoÂ mixed up the pieces of theÂ eight 4-piece jigsaw puzzles (the penguins, etc. that she puts together in the old video). This was a way of forcing her to look at the images first, before resorting to the shapes and the fit of the pieces. She had no trouble with selecting the right pieces, but when she turned to the puzzling, it was clear that she is still predominantly guided by touch.

Even so, though she was still and often trying to fit a corner piece (which seems to be a visual, not a tactile clue) into the middle of a puzzle, or trying to attach the zebra’s head to his tail, it was much easier to talk her through it. I merely had to point out to her that it was a corner she was holding, and that she might use it to fix the zebra’s head, or thatÂ it might fit in the upper left corner, if she turned it a bit, and she was on it.

Most of my help was purely verbal. “Why don’t you fix the zebra’s head” and “fix the giraffe’s neck?” were sufficient pointers. I found that the combination of the word “fix” and a brief description of the two parts she is supposed to join together seems to be the best way of directing her to pay attention to the image.Â

Alos invaluable were the directional clues: “to the left, right, above and below” this or that piece. “Turn it a little”.

Thus we moved up to the little suitcase, the Crocodile Creek collection of four puzzles: one 4 pieces, one 6, one 8 and one 12 pieces. They’re tough: they certainly not designed with young toddlers in mind. Most pieces have a jumble of zebra stripes or simply a flat expanse of background that even I had to study closely to figure out where they went! But I talked her through even the biggest puzzle simply by giving her visual clues about the image and directional clues about where it should go relative to the other pieces.

In the end we did two 24-piece puzzles of “Nijntje” (in the picture they are right behind her right hand). Even those she completed without my even touching a single piece. And in the end she was getting the hang of it.

I trust you, dear. Don’t worry.