We’ve been talking about the food chain a lot lately, ever since Amie watched the movie Madagascar, which is a wonderful spoof on the food chain, with a tongue-in-cheek ending (“The kittie loves the fishies!”). Amie was enthralled by the fact that the lion would want to eat his friend the zebra (“steak!”). When she set up her zoo, she made sure to put the meat-eating animals separate from the vegetarians – which prompted some research on my part: does a hippo eat meat? [***]

We were at Drumlin Farm over the weekend – a lovely day, the sky heavy with snow (photo above, of their barn), only two other families there. On our way in, she told the lady at the gate:

– I don’t want to see the fox because he will eat me!

We explained that that would not happen, first by the following lame explanation:

Like that stops us humans from eating cows, for instance! We quickly asked what foxes do eat, then. There are a lot of foxes in children’s books, of course, so she knew: 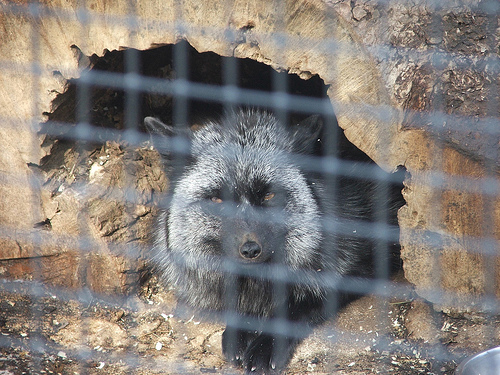 The quip solicited a frown of interest.

When we visited the pig sty, there was only one big hog left. 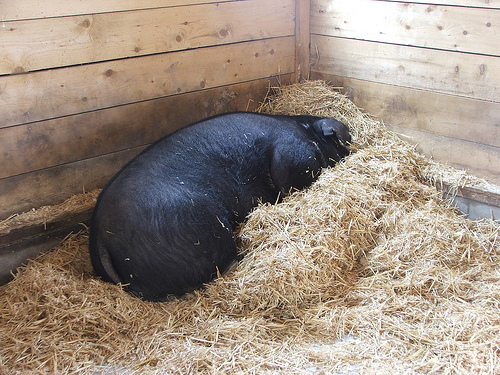 – Where did all the piggies go?

Why disguise the fact?

– They were probably eaten. 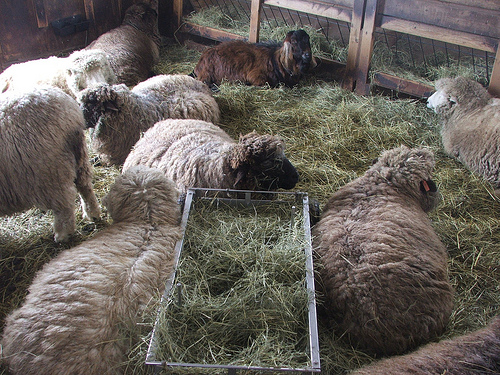 – We shouldn’t let the lion come on the farm! He will eat the sheep and the chickens!

Upon leaving we bought some of the Farm’s delicious sausages. Amie wanted to eat them right away (she gets those meat-loving genes from her Baba). I decided to ask her:

– You do know what those sausages are made of, right?

She knew right away:

– Do you still want to eat the sausages?

– Yes!… What were the piggies names? [Note the past tense there!]

I remember one evening when my family on my dad’s side (all white-collar people, not a farmer in sight) gathered for dinner. My cousin, then about 7 years old, had just lost her pet rabbit, Nijntje. My grandmother had told everyone to keep quiet about the fact that we were having rabbit stew (a delicacy in Belgium). When my cousin asked, “What is this?”, someone (one of the adults) blurted out what was on the tip of everybody’s tongue: “Nijntje!” The drama and trauma!

Why should that have been? Was it because my cousin wasn’t (yet) aware of the fact that meat = animals? Or was it because this meat was suddenly identified as her pet: Nijntje?

Hopefully we will, one day, have at least some chickens (I’m already lobbying for a goat, but the going is tough!). Then we’ll just have to look the animals right in the face, as we feed it, pet it, kill it. 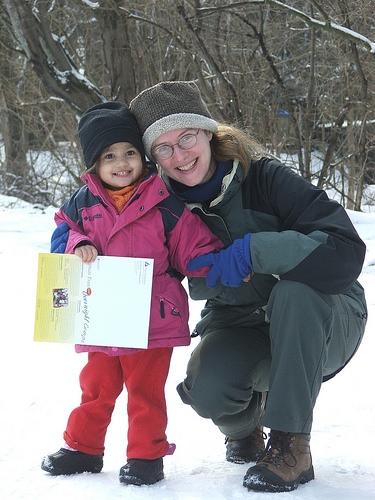 That’s my girl. While gathering eggs she saw a stack of brochures and cried out:

And what a coincidence: Rebecca at Irish Sally Gardens has an entry on killing their pigs for meat.

[*] Lovely Luella the magic cow from Kiss the Cow

[**] The little hen who sows the seed and harvests the wheat etc. while the Rat, the Cat and the Dog lazy around