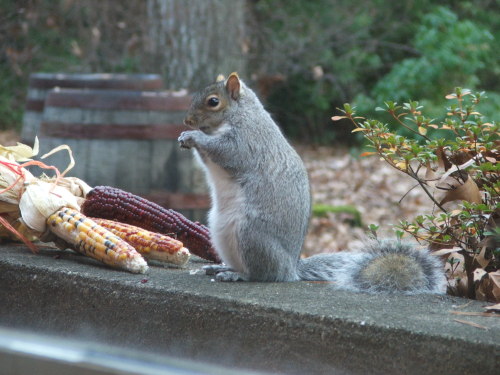 Besides birds, we have also been observing the resident squirrel eating our three ears of Indian Corn and guarding it from other squirrels. He/she somehow got it down from our porch light.

Amie was enthralled by how he carried a kernel in his mouth, ran along the balcony ledge, then down and through the drain hole, just a little bit out into the front yard, there dug a little hole, dropped in the kernel and covered it with some leaves.

“He’s making little cupboards!” she said. She laughed, seeing him so jittery and secretive and going back and forth and back and forth.

He is very used to us now and often looks in on us. Very quaint. He sits on the balcony’s ledge, on his bum, looks straight at you, holding and rubbing his little front paws under his chin, stretching his body up, up… I love the thick white pelt of his belly. Sometimes he just stops and stays, not moving, for a minute or so. Amie and I wave at him and jump up and down (a mere three feet away, with the window in between) but he doesn’t budge.

On other news: the novel is totally, absolutely, finally finished, edited and formatted and everything. I’m sending it off on Monday.