Eek! The joke in my banner has come true. 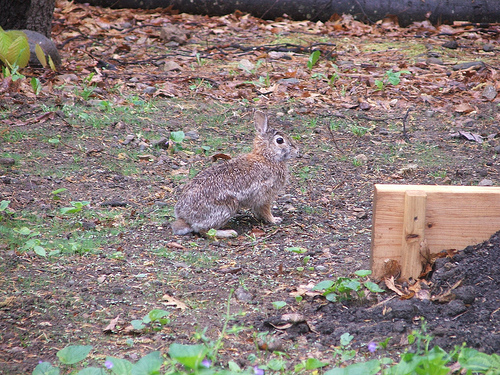 First Rabbit of the Season

Two of them brazenly hopped right by the bed with the lettuces – our only crop, so far! They passed by it either because they didn’t notice the food, which I doubt, or because they were spooked when they spotted me in the window. I assumed the latter and instantly, in the rain, erected a makeshift fence around the cold frame. 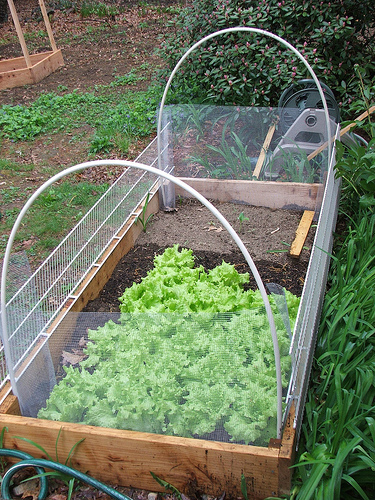 It just brings home to us that we are going to have to erect a fence around the main veggie garden soon. We’ll do that as soon as the tree work around and above that area is done. It’ll mainly keep out dogs, rabbits, and skunks. I’ve never seen woodchucks (groundhogs) around here, or raccoons, but we might try to fence them out as well. We have seen deer, though never that far onto our property. As for the squirrels and chipmunks, well, they’re such good climbers, and what with all the overhanging trees it seems like I will surely lose the fight, so I’m not going to bother.

I’m thinking to reuse the chainlink fence that the previous owner used to keep her dogs in. It sticks out about three foot up above ground and one foot down into the soil. We’ll line it with chicken wire, and we’ll also lay chicken wire underground, horizontally, for no less than one foot, to stop the burrowers. If any woodchucks and raccoons show up, I’ll add a chickenwire overhang around the perimeter to deter their climbing. It won’t be pretty, but it’ll slowly be hidden as we grow our vines on it.