It’s the middle of Summer and you wouldn’t say so. The Boston Globe reported that eastern Massachusetts may have had its “dimmest” June since recording began in 1885.Â  Through June 22, Boston and vicinity had received just 32% of the available sunshine. In an average June, the region gets 55% of the possible sunshine between dawn and dusk. Until now, only 1903 was dimmer, and we’re still waiting to see whether we yet made the record. It was also unseasonably cool, on average of 59.8 degrees, making this the fourth coldest June since 1885. Rain is also a half-inch above average, with some parts of New England receiving 3 times the normal rainfall for the same period…

In my garden that translates into leggy plants lying down in the mud underneath the onslaught of pounding rain, and hail. All the beans, now in flower, are lying down. They’re bush beans but I’ll have to find some way to shore them up – a horizontal mesh? The potatoes in the beds – the “blight” has not affected them further or any other plants -Â  are very leggy too and have also chosen the horizontal plane. Them I hope to harvest soon (they’ve been in for 90 days now).

And then there are the SLUGS. I mulched the tomato and eggplant beds with straw to keep the soil from splashing onto the leaves, but the wet straw might harbor more slugs. They’ve eaten half of the kale, and the radishes look just awful, their leaves in tatters. One night the slugs got to theÂ  seedlings that were on the balcony. Many herbs suffered and only one lone broccoli plant survived. The slugs and the wet conditions did in all the new lettuces,Â  sorrel, purslane (love it in soups!) and carrots that I sowed in bed 4. I’m waiting for drier weather to sow again.

I spread the crushed eggshells that I’ve been saving for the last three months, but they don’t seem to help. I went on a slug hunt last week, and this was the result: 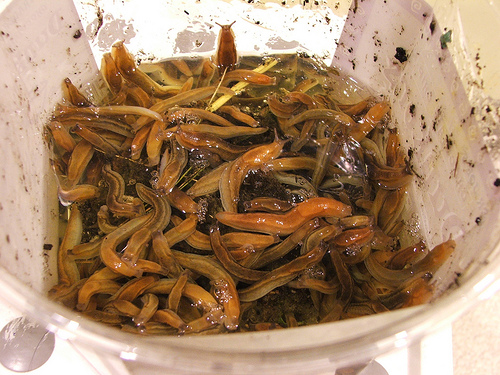 That’s 83 slugs. Here they are again, from a different angle… 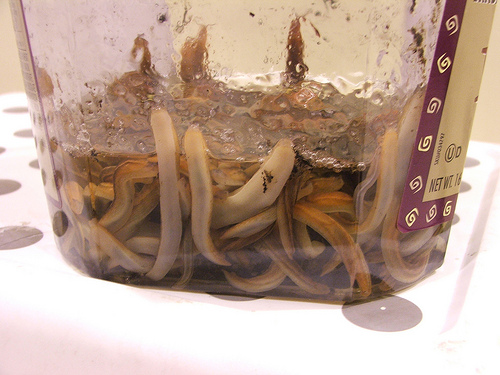 … just to make sure you know how gross they were. And you should’ve seen the soup the day after! But I can’t go on a slug hunt every night. So I bought iron phosphate from the Garden Center and will apply it this evening. Let’s see if that helps.

And what with all this rain you’d think we have harvested lots of water. We purchased four rain barrels and got one from a friendly neighbor. But nope: we haven’t had a chance or a dry day to install them!

Now as for some good news. I despaired of the compost pile made of straw, leaves and coffee grounds from the local Starbucks. After winter it took a long time to even unfreeze. After checking often – while the other bins steamed and sputtered – I gave up on it, which was easy because it stood in a far corner of the property. I checked it out a couple of days ago and wow, that’s good stuff! Crawling with worms and the other larger decomposers, and smelling so good (that is, not at all). I’ll need to sift it as some of the straw hasn’t decomposed fully. I redistributed it to the other two bins and then moved the bin with some of its contents into the vegetable garden.

Three more trees were removed. They were too close to the house and one of them turned out to be rotten and hollow inside. So our wood pile has grown some more. I think we have wood for three (average) winters now. Now if only we could find an affordable wood stove!

Speaking of stoves, I haven’t checked our energy consumption and waste production in a while. I’ll do so soon and average it all out. I’ll have to figure in our many houseguests – now the co-houser and the family members have all left and it’s back to just the three of us. But I already know where I will find one weak spot. The wet weather hasÂ  also undermined one of the corner posts of our Riot (our energy thrifty lifestyle): there has been no line-drying for our clothes this summer. And line-drying them in the basement, which was unproblematic during winter and most of Spring, now makes them smell dreadfully musty and, well, basementy! So in the dryer they must go.

Please, let it be summer as of now on…