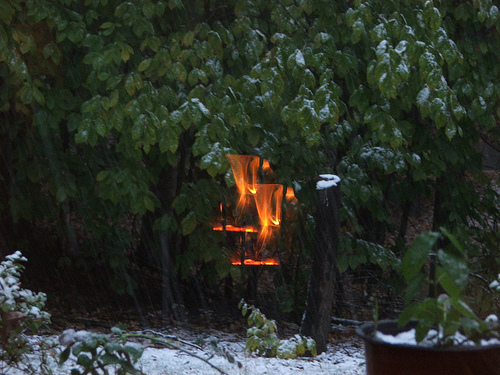 Nothing much of anything happened this week: I’m a bit out of whack with DH gone, and I’ve also started working on the novel again (again!), while it snows. We had our first frost and our first snow, and the garden is in full Winter mode now.

Plant. Planted pak choi. That will be it for this year’s garden, I’m afraid. Started a few more sprout jars: I’ve got three going now.

Preserve. Canned 4 pints of blueberry-basil vinegar I’ve had brewing for two months, then brought my big pressure canner downstairs, as no more produce flows in from the Farmers Market. I got the tiny chest freezer downstairs going and packed it with pounds of flour, rice, lentils, split peas, and seeds for sprouting. I am on the lookout for things like sugar pie pumpkins and potatoes on sale, for storing, but I guess I’d have to drive quite a bit further West or North to find good local deals. There are such big gaps in my food storage, it makes me quite despondent…

Waste not. The average temperature in the house is now 58F and I’m happy to say that, unlike last year, (when we averaged 63F), I’m having no problem with it. When it gets colder than that we start a fire. Amie is herself like a stove, she loves it colder, same as DH.

Want not. Aside from the freezer foods I also stocked up on elderberry syrup from Honey Gardens: there was a major sale on it at a local health food store, and I pounced. Amie gets two teaspoons of the stuff a day, and so far so good. I also got bought a cup of dried elderberries ($30/lb!), from which I want to make my own elixir or syrup.

Build Community Food Systems. None of this. I so wanted to go to the Massachusetts Relocalization Conference, but childcare fell through.

Eat the Food. We’re eating everything from the garden as it’s too little to preserve. Also started eating home-canned green beans and applesauce.