Incredibly, it almost hit 60 today. After lunch I went out to the hive – appropriately dressed, this time – to check the bees’ stored honey and the pollen patty and sugar fondant I put in last time. There was no wind and the sun appeared sporadically. I took 10 minutes – my feet were frozen by the end of it, having sunk into over a foot of melting snow. I know, those boots, those boots… 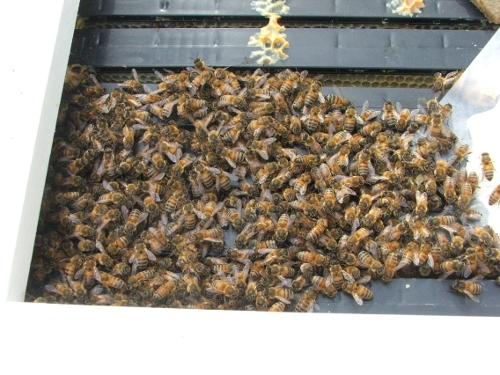 I got a better chance at taking a closer look and pictures as they were less aggressive than last time. There wasÂ that nice sized cluster of active, healthy-looking bees. 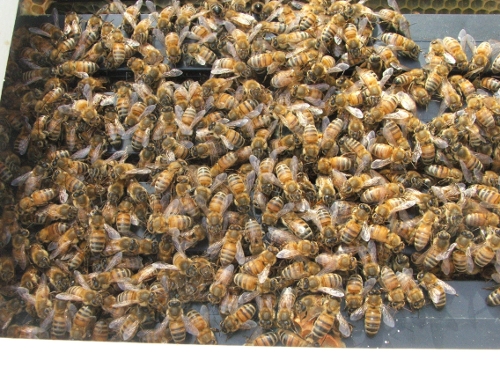 I didn’t want to disturb it, it still being a bit chilly for them, so forget checking on the queen. Â They were in the East corner of the hive. 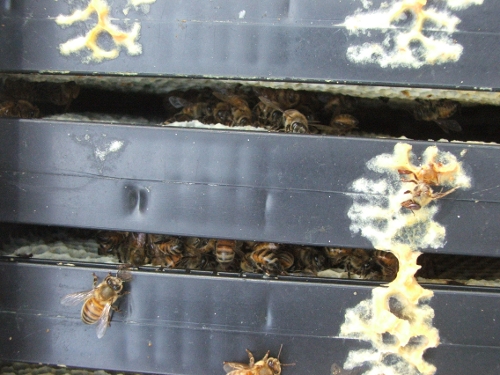 Off to the South side there were many dead bees – all the bees in the above picture are dead, except for the ones on top of the bars. They were the edge of the cluster and possibly froze.

There are two frames full of honey off to the side, which some bees were harvesting. I wanted to move these closer to the cluster and get a better look at those dead bees, but a slight wind started up and by the agitated sound of the colony, I could tell that it was time to close up the hive. Â They have access to a large block of fondant, so they should be fine for a week at least.

I’ts tough to estimate how many bees are alive in there without pulling the frames and seeing how deep the cluster extends. But certainly not the 50.000 or so that entered the Winter. It seems like such a waste to lose so many. I am very curious to see how they will build up over the Spring. They must have begun the brood rearing, but in the pictures I can’t spot any very young bees, yet.