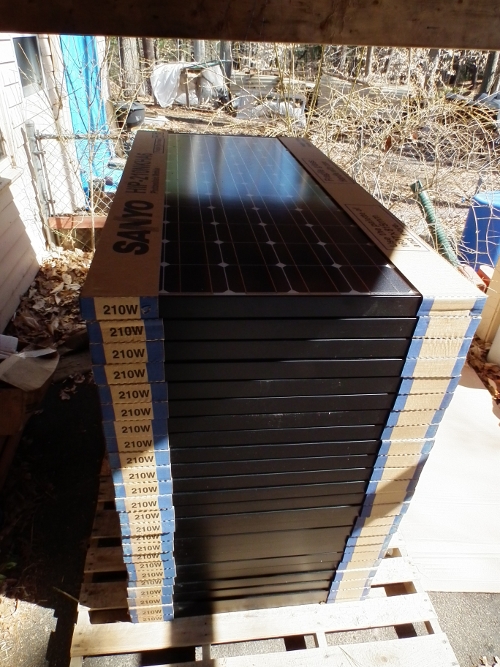 We’re doing it, we’re putting solar PV on our roof.

Though many went before it, taking delivery of the stack of panels felt like the first step. It was the first time something happened, not just talk and research and calculations. It was alsoÂ irreversible: that’s $16,100 worth of panels, paid for and delivered, sitting in our carport!

This week the second big step follows: the taking down of about 10 big trees in order to get the shade off the roof. Next we enter the paperwork with the Commonwealth of Massachusetts. Â Then we wait. When we get the funding, the panels will be installed sometime during the Summer.

It’s a big project and I must admit I am nervous about it, for three reasons.

First of all, it involves a large amount of money up-front, and it has wiped out most of our other plans for the summer, like chickens and drip irrigation.Â But (on paper) the thing pays for itself in 7 Â years, and then we should get about 13-23 more years of use out of it.

Also, we use 390 KWH a month, on average, so this system should be able to take care of all our electricity needs (using the grid as the battery). And that doesn’t mean that we’re going to party it up now. On the contrary, we’ve already decided that we can become a little more frugal, so we canÂ plug in an electrical on-demand water heater and take our hot water off oil. (That’s still being researched).

Moreover, this electricity will be renewable, non-polluting (as of installation), and decentralized. It will be an eye-catcher too, a statement, and an opening for a conversation.

My second reason for hesitation isÂ the real costs of these panels. I am not ignorant of the manufacturing or “back side”Â of solar, which includes:

I’m still trying to figure out what those are for our system. The amount of facts and especially opinions on the net is staggering. I’d like to talk with people like Richard Heinberg and Bill McKibben, who are aware of all the facts and who try to live a principled life, about their panels.

Last, but nor least, there’s the trees. It will take one day to take them down, and the whole summer to cut them up into firewood and to grind out the stumps. Their removal will drastically change the aspect of our property, Â and for the better. It will:

Sometimes changes and the resulting opportunities, though for the better, are overwhelming!