Karen, a friend I met through the Training for Transition, came for a visit and we talked homesteading, gardening and… bees. This was her first time at a hive opening.

The bees are doing better, but their population growth is still not what I would expect. There were grubs in there, as you can see in the photos, and many young worker bees (some still very pale), so there’s a mated queen in there laying fertilized eggs. Maybe she just needs a little more time to ramp it up. If not, if she’s weak, the bees will replace her.

Here’s me peering into the top box. Â You don’t often see me doing this because there’s usually no one there to take a picture – thank you, Karen! I definitely prefer the hat and veil over the vest in Summer. Karen wore the vest and it’s like a sauna, but for her first time she felt safer in it. 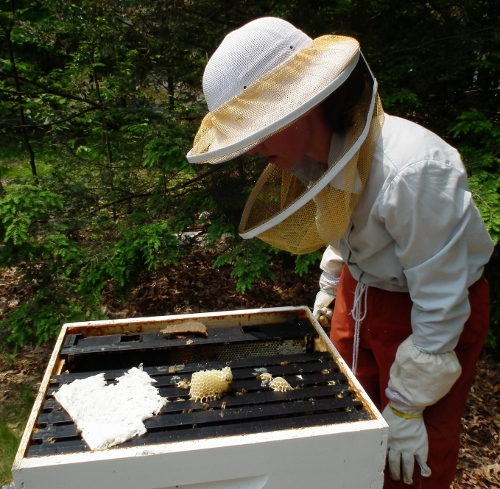 The bees filled up about half of the top box with honey. When I lifted it, after wedging it off the bottom box, Â it was pretty heavy. Â I’m happy my honey supers are mediums, not deeps. The bees in the following photo are either disgorging fresh honey into the cells, or capping the filled cells. The white stuff is all honey cappings. It’s the newest and thus purest (and thus whitest) wax in the hive. 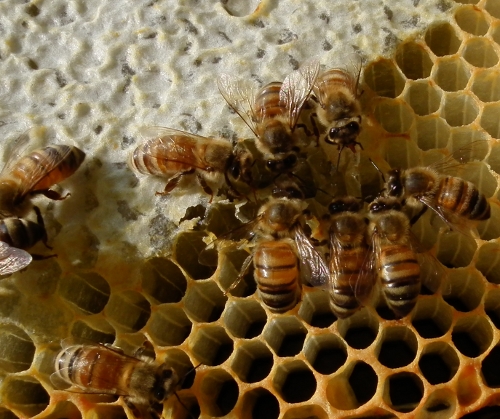 When I took off the top box I ripped off comb the bees had in built between the frames and exposed some grubs. The bees surrounded these grubs, trying Â to do I don’t know what. The grubs are doomed, of course, so suddenly exposed to the light and heat. I’m very slow and probably overly cautious when inspecting the hive, but this still happens. Good news: no mites on the grubs! 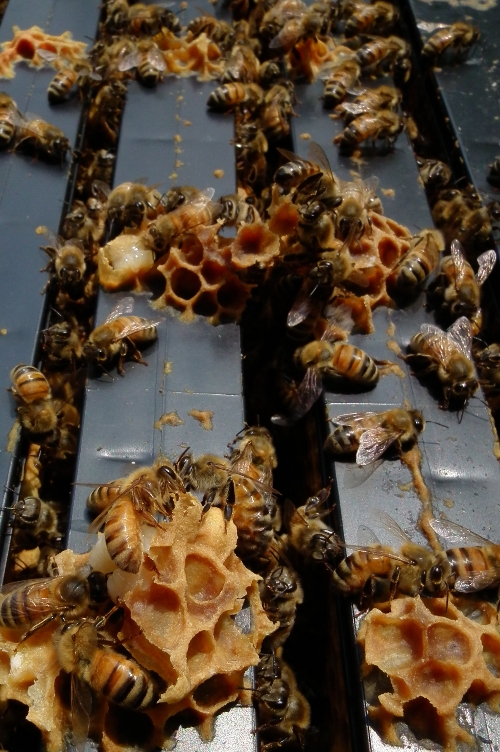 Finding grubs at that spot means of course that the bees bringing the broodnest up into the second box instead of expanding it horizontally. Well, they know what they’re doing! 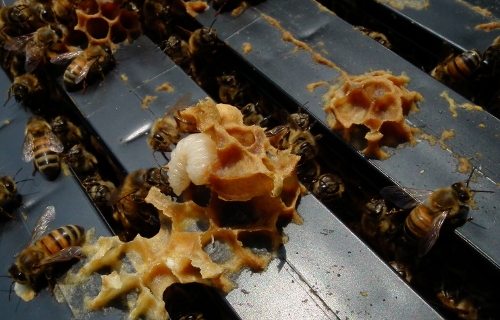 The comb in the next picture is browner: it’s brood comb. No brood in it yet. These bees were cleaning it out. 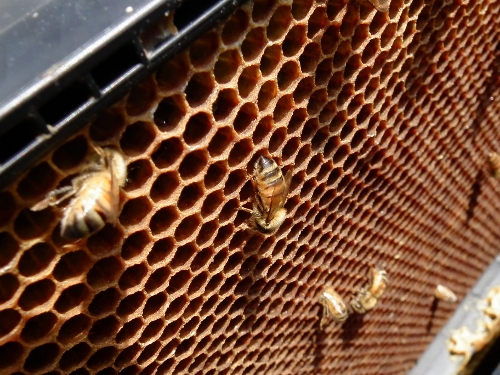 I had gone in with the intent of seeing how they’re doing. I ordered the Apiguard mite treatment – it will arrive early next week. By then I should have done a mite fall count. The Apiguard is natural but it might still interrupt the brood cycle, so I should only do it if necessary. Also, it will postpone the supering for a couple of weeks, because you don’t want the thymol essential oil that this treatment is based on getting into the harvest honey.