I’ve always been fascinated by evolution in all its aspects (or at least those I can comprehend) but, I realize now, for different reasons than some if not most people.Â Usually people’s Â interest in evolution is in a theory of advancement, even perfection. These people reach for the light, like the Â plants that developed vascular systems to grow upright, up toward the sun, and left the primitive, non-vascular mosses behind, eventually shading them out.

The Asters, the dandelion among them, will appeal to them. They are some of the most advanced plants in on earth, well-adapted to new circumstances, and newer.

I’m not charmed. The Asters are to me but the first and the least interesting step on a long ladder leading back,Â down into time. Primitive, that’s what I want to Â see. The older, the more fascinating.Â So, among the flowering plants, I like the buttercups (Ranunculus). Â The buttercups are (give or take) at least 34 million years old (*).Â I am honored to have one of these awesome survivors in my garden.

Now, my buttercup is not nearly as ancient as these guys: 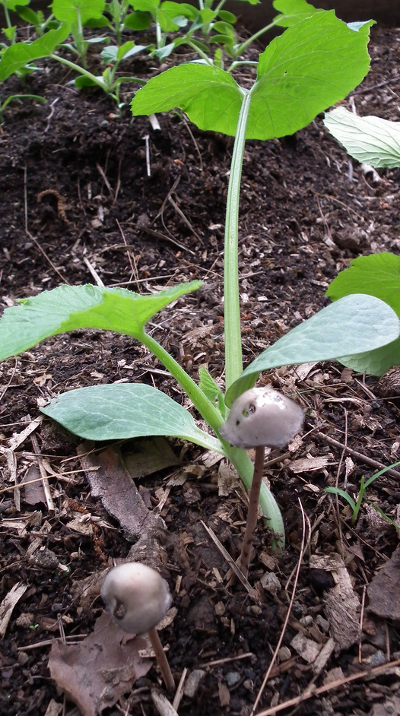 I don’t mean the squash – though the Cucurbitaceae as a family are Â even older than the buttercups, originating inÂ the Late Cretaceous,Â some 60 million years ago (**). I mean the mushroom, as yet unidentified. A mushroom is the fruiting body of a fungus, and fungi like these made landfall in theÂ Cambrian, around 500 million years ago, long before plants did.

These mushrooms are growing, by the looks of it symbiotically, in the bed I fertilized with horse manure last Fall. It is,Â by the smell and feel of it, my richest bed, but we have mushrooms above ground and mycelium in it (or, I should write, through) itÂ all over our property. It’s nothing to be alarmed about. Almost all plants partner with fungi, and 80% of plants couldn’t survive without them. It was probably this association that made it possible for plants to come ashore in the first place, between 440-510 million years ago.

I’ve found the same combination on some of the seedlings’ peat pots (the pairing here is some other, unidentified fungus, with a pepper seedling). 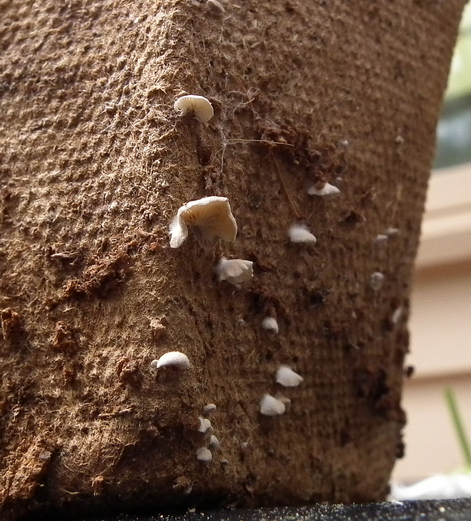 How awesome is it, to have evolution – time itself – growing right there in your vegetable garden, and to know it, and to be able to tell some of that story.

(*) see here for a marvelous ladder.