The Nor’easter of October 2011 hit our town pretty badly. Actually, it was just a small snowstorm, not too heavy, not long-lasting. ButÂ the trees were not ready for it. It was only the fourth time that there was snow before Halloween in NYC since the civil war! Add to that that the trees now “think” (for good reasons) that it’s summer at the end of October…

So they were still flush with green leaves, which had only just started turning. The snow stuck to them and that’s what weighed them down. This was the view out my living room window the morning after the storm. 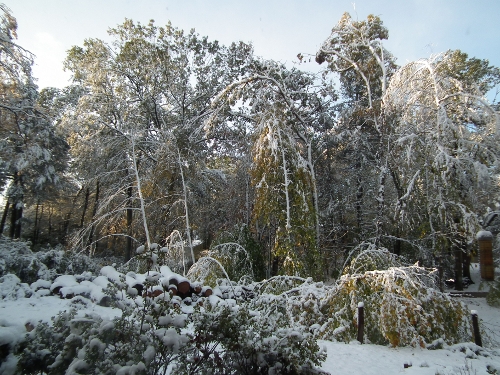 Gorgeous, but dangerous. None of those trunks or branches are usually that diagonal. Several tops snapped off after the picture was taken.

The night before this picture was taken, the night of the storm, I lay awake in bed listening to the creaking and straining of the trees, the tearing of wood fibers, then the crack, thenÂ whoosh and finally thump of limbs and branches crashing to the ground. After a couple of hours of this, you just fall asleep from exhaustion, your brain telling you: que sera, sera.

None hit the house, the cars, the roof with the panels. But the hoop house was hit, and two of our fences (metal) are beyond repair. The veg garden is a mess. 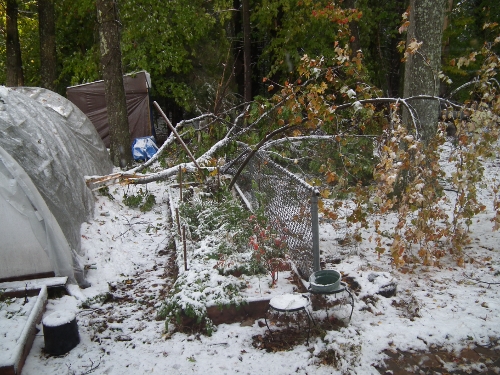 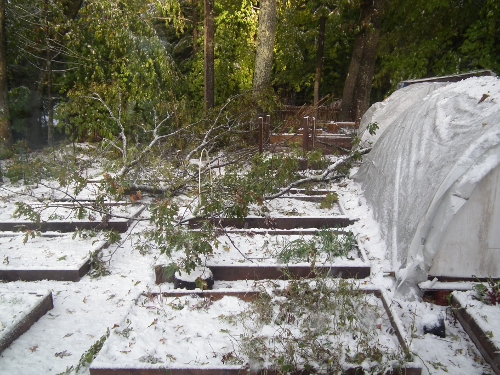 There are still a lot of snapped limbs – some the size of small trees – hanging in the canopy, waiting for a good gust of wind to tear them loose. It’s the reason why Halloween is canceled!

Well, to be precise: the town is leaving it up to the discretion of the parents but advises to do an “alternative Halloween”. DH and I know what swords are hanging above our heads, so we’re not letting Amie venture outside.

Another reason for canceling Halloween is that, after over 50 hours, 25% of the town’s population still doesn’t have power back. School was canceled today too, and Amie’s elementary school might still be out of power tomorrow. 56% of people in my town were without power.

We were among them. The evening of the stormwe heard a loud thump and then the power was out. Â Our solar is entirely grid-tied. The grid goes down, all our solar harvest gets diverted into the ground.

But we were prepared with one head lamp each with batteries that are always charged. 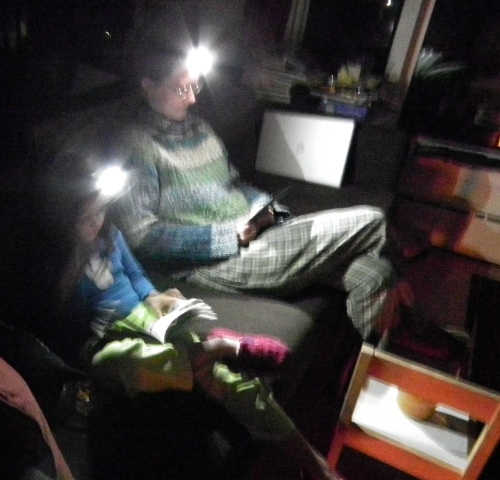 We also had our trusted stove – the best investment we ever made – and lots of wood! It provided heat, crucial because the temperature dropped to 25 F the following night. The town opened an emergency shelter in one of the schools.

The stove also allowed hot water for washing dishes and even for a bucket shower with shampoo, and for tea. I also made a wonderful stew on it of garden vegetables and sausage. 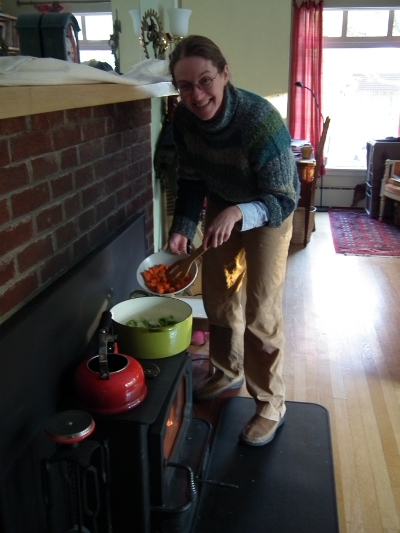 Our power was restored after 40 hours. Not too bad, compared to last time (after Irene), which was a little over two months ago. That time we were without electricity for 6 days. So we knew the drill (it was warmer then and I cooked outside on the camping stove).

With the way the economy is going I don’t see all those wires and cables going underground, as they are in most of Europe. So we’re looking into battery backup for our solar.

{UPDATE} When I told Amie we couldn’t go trick or treating she burst into tears, so we went along the safe side of the street, just 10 or so houses. She also opened the door and doled out a lot of candy. So she was happy. Not our usual Halloween, but some of it, anyway. Many people from the North of our town, which is still without electricity, came to our neighborhoods.