Yesterday was an animal day.

First, I checked on Hive 3 and finally undid the mistake I made over a month ago. Back then Â I pulled a deep frame out of that hive’s brood box to give to a friend, bees, brood, eggs, honey and pollen and all, whose hive was in trouble. I pulled the frame but neglected to immediately insert a new one. A week later the result was clear: the bees had filled up that space with a huge burr comb, filled with brood, etc. Â At the time I discovered this, I was harvesting honey and the colony was already pretty upset with me, so I didn’t go in to fix it. Then I was too busy, or it was too hot to go into the hive.

Today I did it and the bees were surprising okay with it. I felt bad about pulling out so much wax and so much brood, and then having to shake all the bees taking care of the brood off into the hive. But on the other hand I got to see how infested the brood was with varroa mites: a real eye-opener and skin-crawler! I’ll do a mite fall count and treat with formic acid, which will also kill any tracheal mites present in the box. 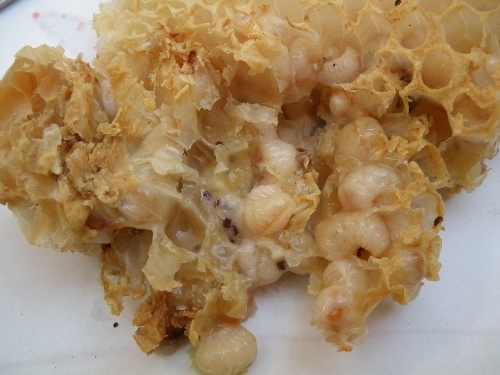 All those brown spots on the brood (mostly drones) are varroa mites. They prefer capped over brood but also live on working bees.

In the evening we had our BEElieve meeting on Fall Hive Management, and I brought the pictured burr comb for people to see. Integrated Pest Management was number one on the agenda. 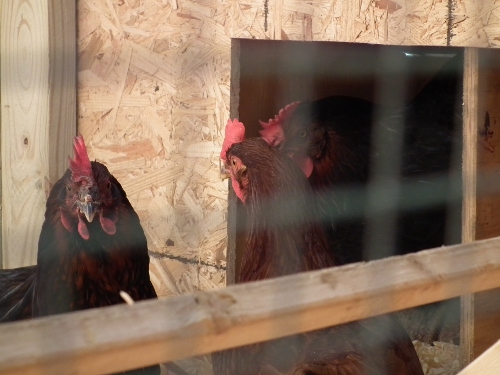 Tete-a-tete in the coop: “Has she lain that egg yet?” – “Poor thing, she can’t, what withÂ her and that camera! Â A girl needs her privacy!”

In the afternoon I gave the coop its first serious clean-out since building it. With rake and broom I pulled all the bedding from the coop, then scrubbed down the walls and floor with a rough brush and a solution of vinegar, dish soap and water. Let it dry out and put in fresh pine shavings. The newly used egg boxes got special attention.

I also dug all the bedding out of the first run, down to the clay soil, and refreshed with new pine shavings. I think I’ll want to start switching to shredded leaves or dried grass in that part of the chicken house. Those shavings cost a bundle and they retain the humidity from the rain too much. I also scrubbed down the plank and platform that lead up to the coop door, and soaked the waterer and the feeder in more vinegar.

It took me a good two hours to do all this. I wore a mask because the dust was unbelievable. No signs of mites or live or any kind of creepy crawly here!