Woah, I just did the most stressful honey robbing yet. A warm (80F) and sunny day, the bees were busy.

I brought the super with the frames we harvested last week (green in the image). You return harvested frames to the hive so the bees can clean out the honey that is inevitably still in the comb. My mentor Rick told me to put an empty super in between the harvested honey supers and the nest boxes. If you don’t, the bees feel compelled to fill those frames back up again, or the queen might start laying in them.

So I went into Hive 3, my strongest hive. I pulled out the three frames of honey that were still in the top super (blue in image). Then I put that box aside and checked out the super below it (yellow). It had been harvested a while back and the bees had emptied it nicely and rebuilt some of the comb I had wrecked when scraping off the cappings. Unfortunately they were also rearing brood in it! Not a good sign for later, if I find the brood nest to be mainly in the top box – more manipulating to come. But for now, I took off that super, put the empty box in its place, then replaced the super with the Â brood and, on top of all that, the super with the harvested frames to be cleaned out. 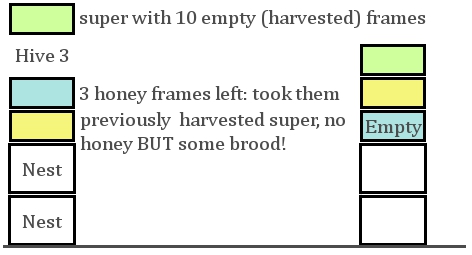 Hive 2 requeened itself in May and never caught up to Hive 3, though they were both packages from the same source, installed on the same date. There is only one super on this hive, with very little, uncapped honey and fortunately also no brood (yet). Once an empty super becomes available I’ll put it in between the super and the second nest box.

Hive 1 swarmed in May and also never caught up. It has two supers, first one old one (still with plastic Pierco frames) and, on top of that, one new one with wooden frames and Duragilt foundation. I found this latter one has three to Â four or so frames with capped honey, I could steal only two because my “robbing box” (a nuc box that I can close off to the bees after dropping each robbed frame) only holds five frames – which is heavy enough! In the bottom super I saw a couple more frames with honey, so I think I’ll be able to rob at least another 4 frames from this hive. Maybe I can combine the half filled frames from this hive into one box, thus emptying one super to interpose. I wish I had made more supers.

I need to treat the bees for varroa. I’m already a bit late: the formic acid that I will use will kill the mites (also the tracheal mite) but it might be too late for the bees to fully recover (that is, to repopulate with the next generation) from the viruses that the varroa has given them. Still, it will be good to try. As Hive 3 is totally done with honey, I’ll treat it tomorrow (weather permitting), along with Hive 2. Hive 2 may have to wait till after I’ve robbed the rest of its honey.

I open the hive up, take out the frame I want to take, brush off the bees, put the hive in my nuc box and close it off, so the bees can’t get to it. As you do that with five frames the bees get understandably more agitated, and bees get into the nuc box. So when I carry the box away I make a stop in between the apiary and the house. There I open the box up and try to get brush off or shoo off as many of the bees who caught a ride. Then I rush the box inside my screened porch. Inevitably bees get inside, but I catch those and let them out the front door. I can’t let them out the porch door because by then hundreds of bees are buzzing against the screen, trying to get to the honey.

Sorry, ladies, but thank you!