(*) I totally stole that title from my friend and fellow chicken and beekeeper, Kath, who blogs at This One Good Life. She too had to do what I did today.

Neither Hive 4 and Hive 5 , both installed on May 5, were doing well. In Hive 5, the split off Hive 3, I’mÂ pretty sure the bees killed the new queen the moment they had a chance. No eggs in there whatsoever, but a strong population, and some new bees still eclosing from the brood frames I had put in: in other words, a colony worth saving.Â Hive 4,Â the new package, had a bum queen. While there should already be nice patterns of brood in all stages, there was one measly patch of eggs and some larvae on one frame, and the bees didn’t seem to take any interest in those. Neither did they take interest in the queen.

So today I picked up two brand new queens from my supplier. Installation in Hive 5 was easy: it’s only one box and I was pretty sure, after several searches, that there was not already a queen in there. So in went the new one. The bees were very interested, crowding her cage. I hope they make it Â this second time around. Installation in Hive 4 was more difficult: they have two boxes, and there was still a queen in there. I located her, caught her (the workers weren’t in the least bit interested in her panicked reaction) and stuck her in a cage. Then I installed the new queen. Fingers crossed.

I brought the old queen in. We studied her a bit, then I chopped off her head and put her body in alcohol. The idea if to extract and preserve her queen pheromone to trap swarms. 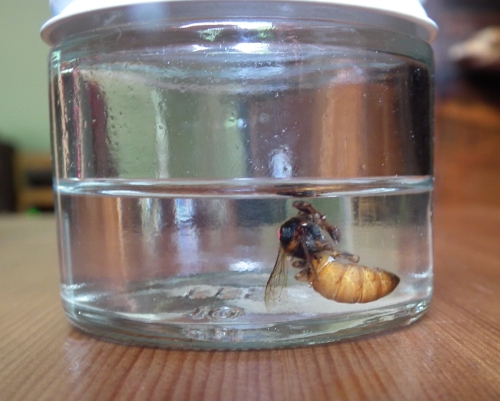 Speaking of swarms, Hive 3 is extremely strong. There’s already a super on it for Spring honey. Unfortunately on a previous inspection I found the queen walking around in it and eggs. You don’t want grubs in your honey, of course. Also, brood comb wax gets dark and gross with the skins of pupating bees lining the cells. You want your super honey comb to stay clean and light-colored.

I went in and looked through the super, frame by frame. I found lots of honey, some almost ready for capping, and no queen. I set it aside and went in deeper. The queen was in the second last frame in the lowest Â deep (that’s 28 frames into my inspection!). She looks so good, that queen, big and round, and judging by the care her attendants give her and the amount of brood in that colony she’s still good in her second year. I carefully put the frame with her on it back in, replaced the second deep, then put on a queen excluder which will prevent the queen from going up, then the honey super. I’ve only once tried the queen excluder and back then none of the bees even wanted to go through it to go draw out the super. But this super is already drawn out, so it might be different this time.

I also found many swarm cells! Last year’s swarm of Hive 1 severely weakened the mother colony and it made hardly any honey, then didn’t make it through Winter. So I’d like to prevent a swarm this time or, if I can’t, catch it. I’m ready with my swarm box!