Hive 3, my best hive, the one that gave me 70 lbs of honey last year and had already filled one and a half honey supers with Spring honey this year, swarmed! Around 11:30 am, my mom (parents are visiting) and I came around the corner into the veg garden and instantly noticed the noise. There was a large though diffuse cloud of bees in front of the hive, vanishing. I think that was the end of the swarm, though, so I mistook it for a pre-swarm, or perhaps a whole bunch of new bees taking a practice flight. But even when the hubbub had died down, I could hear that insistent buzz. For a moment I thought, it must either be psychological (the way you still hear the buzzing the night you had your first bad hive experience), or it’s a swarm and it’s close. I looked in the bushes and trees, nothing. Then I looked up. 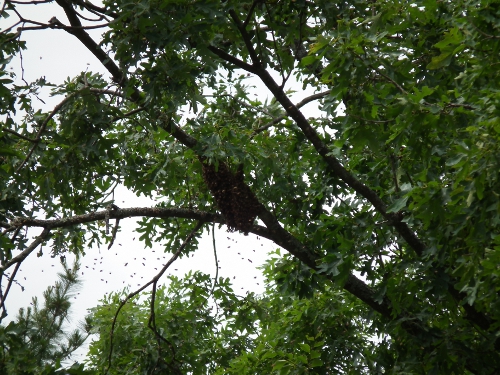 There, in the oak about 40 feet (?) right above the bee yard, the ball was forming. Too high up for me! Â The swarm soon flattened itself against the branches and that’s where it’s still at this moment (7:10 pm). Apparently, that it was a cloudy day with sprinkles didn’t stop them. 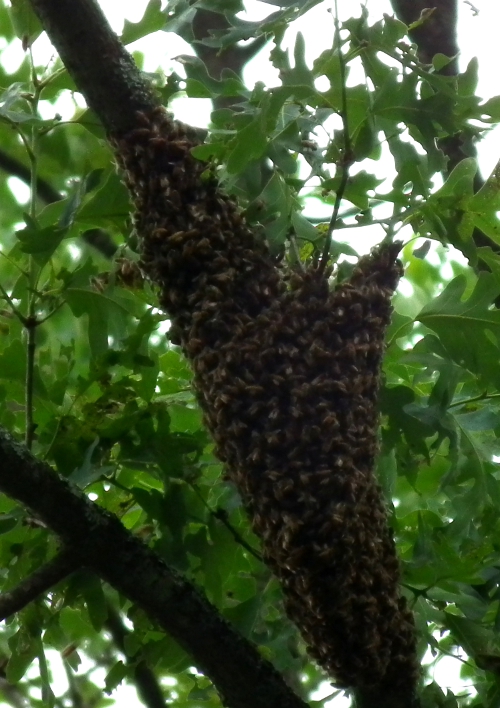 That was the best queen I had ever had, and I had been toying with the idea of using her as a breeder queen. Too late! IÂ did put swarm trap up for them, hoping the scouts that will be coming off that swarm looking for a new home will find it, but who knows! If not, I’ll have lost the best part of that colony. My other strong hive (hive 1) also swarmed last year and after that it never recovered, didn’t give me any honey, and it perished over the winter. Well, though I am apprehensive because feral bees don’t do well around here, I do wish them luck!