I pulled the oats – Terra Hulless Oats,Â Avena nuda,Â literally “naked oats” -Â from their bed mid July. The plants were falling over (“lodging”) and still somewhat green (10%), which is when Logsdon recommends harvesting them. I stuck them, straw and all, in buckets to let them ripen and dry in the sun-filled protection of my porch. This morning Amie and I set to work.

I stripped the spikelets off the straw, setting the straw aside for the chickens (*). Amie insisted on getting the oats out by hand, basically both threshing and winnowing them in one go. It was worth the hour or so that we sat and did this. We chatted about “becoming a better person” (yes, I know), learned the anatomy of an oat (they’re “furry,” and one’s hands feel so soft after working with them), took notes on how many of the florets had filled out (some had four, some two, rarely was there just one or none; I’d say 3 on average). Last but not least, we pondered about how to make this process easier.

I’ll write more about this later, but first I want to share some images. 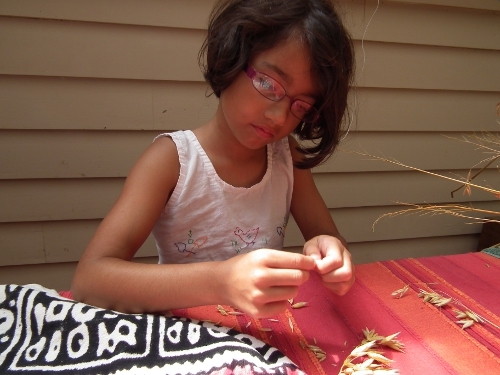 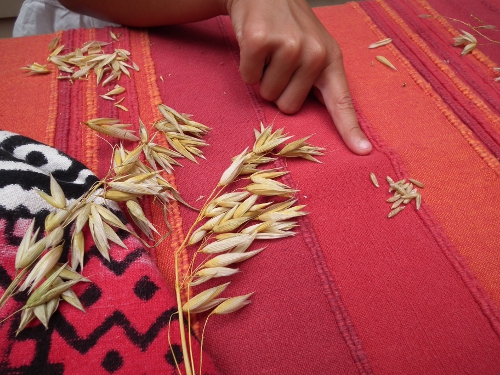 Seed heads (“spikelets”) in their stalks, each head has about five florets, on average three of these were filled out with and oat.

Here’s a video of me finding four oats in one seed head:

I had meant to mute the video, but oh well. 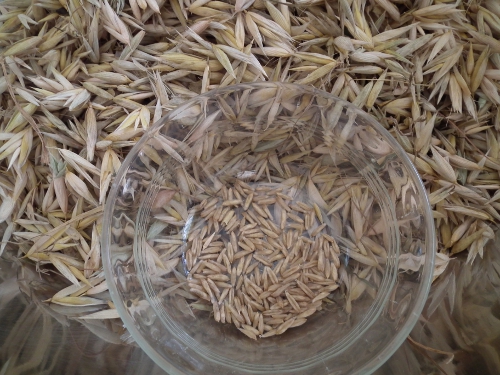 Our progress after an hour. Mmm.

(*) In order to use the oat straw for infusions, you need to harvest the seed during the “milky” stage, that is, before they’re ripe. I harvested later. So to the chickens it went.