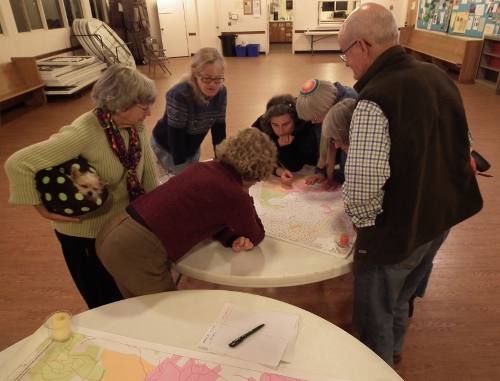 WatchingÂ Bill Moyers’ Â recent interview with Wendell Berry, itÂ was hard not to tear up, because of the sheer beauty of this man, his poetry, his speaking, and his holding both grief and joy in equal measure and balance:

It’s hard to think of any thing that’s precious that isn’t endangered. But maybe that’s an advantage. The poet William Butler Yeats said, somewhere, “Things reveal themselves passing away.” And it may be that the danger we’ve now inflicted upon every precious thing reveals the preciousness of it and shows us our duty.

There’s a terrible kind of hope there that makes one hold one’s breath. There’s also the caution not to hold it for too long, and to just get going.

Just breathe, and do what’s right. ButÂ doÂ it!

And what is that? The question, “what is right?” pervades my whole person: the morality playsÂ Â in my mind (the judgments of myself and others, the dreaming and wishing), daily householdÂ acts (what to put the thermostat at), the gathering of the tribe for a meal and conversation, my activism in the community (a letter to the editor, a call for a meeting), my forays beyond the local (usually by “voting with my wallet”). The question rarely gets answered beyond a gut feeling. Surprisingly, for someone who had to relearn the layout of her hometown when learning to drive, in this moral landscape I am satisfied with that gut feeling, just as I love getting lost for a bit beforeÂ grabbing the unreliable ten-year-old road atlas. Still, sometimesÂ I wish I could nail it down into some sort of “manifesto,” not so much to rationalize it or even to make it more trustworthy, but to make it more accessible when I feel off course and need some reminding.

Feeling a little adrift is not a bad thing, of course. ButÂ after a while, it calls for action.

I had been feeling Â most adrift with Transition Wayland, the group I am most involved with, to the point that I’d say it’s my part-time job (unpaid). I felt we weren’t going anywhere, accomplishing anything. I read about Transition and other such groups starting food co-ops, putting up community solar, getting a seat on the town council and rezoning for local agriculture, holding unleashings with half the townsfolk in Open Space. With the urgency of reports and bulletins in my back I wasÂ in a hurry to “put systems in place for when they’re needed.” I saw deep rifts in my community and felt that, even if I am helpless as an individual, I should still have influence through this Transition group that promises to act in the middle between the individual and the global.

The crisis came when I realized that all of our latest meetings happened not as Transition Wayland – working on our town’s resilience in the face of climate change, etc. – but as the tribe several of us found through it: satisfying, heartening days full of canning, sharing books and tools, gardening together, in our private homes, unannounced on the website or in the local newspaper. Tribal, closed, self-sufficient: the opposite of Transition.

My compass went berserk, as if you hadÂ dropped me at the magnetic pole. There is nothing there, you know, at the pole, Â and it keeps moving!

I went a little crazy, inspired by trainings and books on effective groups, open space and how to design one’s group culture. Â My first opportunity to put us to work was at a meeting about Eisenstein’sÂ Sacred EconomyÂ scheduled a while back. The idea was toÂ present the book, which no one else had read, and then to discuss the long-held idea for a co-op. Though I had announced this on the site and in the local media, only the core group showed up and just one new person, making ten of us. It confirmed my suspicion that most people think of us as a finished, closed tribe.Â I lectured on Eisenstein, rigid with ambition even though the conversation wanted to go more deeply into more personal stories of giving and receiving.Â I skipped my carefully prepared segway into the co-op idea, instead projecting it onto the wall in all its powerpoint glory: the goods and servicesÂ it would ideally offer, its legal underpinnings, how the board would be chosen, dividend paid out…

The others couldn’t believe it. “You want to go into business?! Why sully our good intentions with money? Even I don’t feel the need for this.” Â In all my years in Transition, I had never felt so at odds. Even those in the group who had also held dear the co-op, could not Â recognize it, let alone come to its defense. We did find our messy way to the bottom of the issue, “Why do you feel we need this?” But by then it was too late, and late. People had already drifted away without saying goodbye, the group unraveled.

Driving home, I told myself: Well, this was good, this was something different, this was Storming, right on cue after Forming and before Norming. I lost a night’s sleep over it. When we came back to it in many good individuals conversations, I managed to explain my intention better: to set the group on track again, find our direction. I billed the meeting two weeks later, on our site and in the local media, as a “General Meeting” where we would do a visioning exercise and a find-your-mission game to re-invent our group culture. I thoroughlyÂ prepared for this.Â People and Permaculture,Â The Empowerment ManualÂ and the resources on the Transition Network site are wonderfully empowering and a lot of fun. I studied, then wrote out an entire script for the evening. A problem was that I didn’t know who would come. I’d done a lot of promotion and was hoping for some new people. The goal was that they’d get to answer the question, “What is Transition Wayland,” themselves. I packed twenty clipboards.

My first clue to what was really going on came on the day of the meeting, when I ran the agenda by a friend, over the phone. I went over the visioning exercise: “How can we work for a better future if we can’t even imagine it? So let’s imagine it! Get comfortable, close your eyes if you want to.Â Imagine a world, ten years, twenty, fifty years from now, where our community is transformed to satisfy your deepest wishes for it. It is a beautiful world you feel safe in. Find yourself in your home. Look around: what does it look? Smell like? Who built it?Â Where is everybody? The children? The elders? The sick?Â You’re about to have a midday meal. Who is there with you? Where do they live? What do you eat? Who cooked the meal? Where did the food grow, and who grew it? How did it come to you? How is the land taken care of?” Etc.

It brought my friend to tears. How stark the contrast between this longed-for world and reality, where teachers are murdered by fourteen-year-old students.Â The exercise did exactly the opposite of what it was meant to do: it thrust her into a feeling of profound powerlessness. My suggestion that with Transition we get to expand our power from the individual circle to the community circle and start the work sounded empty to my own ears.Â I thanked her profoundly for reminding me of the courage that is needed to imagine a better world.

At the meeting there were eight of us, just the tight core-group (minus one, who couldn’t make it). We did a fun round circle, sharing our moods as weather reports. I introduced group culture and its two domains, vision/mission/goal and process (how meetings are run, decisions taken, etc.),Â and asked: Â Are you happy with our group culture? Is it transparent to you? I explained how I felt adrift.

We never got to do the visioning or any of that. Â The fact that it was “just us,” Â which had alarmed me at first, turned out to be a blessing: I could put my five-page script away. Â We talked freely about what we already do and it was good to hear it.Â We build trust in our community, by simply walking the trails, for instance, and that gives meaning to our place for everyone in it. We make connections, all the time, like fingers of a hand reaching into the community, and we have to trust that the spaces in between the fingers fill up in unexpected ways often unknown by us. We model compassionate living, friendliness and everyday courage. We counter the dominant culture of fear and distrust. We are more organic and “opportunistic” than prepared and “on track”…

We talked about Wayland Walks, our most successful running program, which had just lead a walk to which twenty people came: twenty people deeply present in the landscape, in search of wild edibles. We gathered around the Master Map that will come out of all this walking for the town’s 375th Anniversary.Â The crisis had brought me right there, where I needed to be: to this map of our town with these people standing around.

It’s not true, what I wrote, that there is nothing there, at the pole. Â ItÂ is true that it keeps moving. In fact, it could be anywhere.

It is theÂ place where you get to question your compass, shake it a little to see if the needle is stuck, and be reminded thatÂ you cannot, once and for all, “nail down” that needle. Â What is there is the satisfaction that you should just trust your gut feeling. Â Just breathe, and do what’s right.

The writing of this entry was inspired by my reading today ofÂ Charlotte DuCann’ s latest blog post about the walks she takes her community on, and especially these lines:

So having followed the Transition ethos ofÂ relocalisationÂ and community resilience in these five years,Â Â I realiseÂ what I have really beenÂ doing within its well-managed civicÂ remit is fosteringÂ aÂ cultureÂ that cherishes all theseÂ Â wayward,Â Â earth-lovingÂ Â actions.Â Â Paying attention to things that civilisation has scant time for, or has forgotten in its pursuit of power.Â I have come to see thatÂ return and regenerationÂ -Â of soil, neighbourhoods, people, placesÂ -Â is the wild card in theÂ pack, the cardÂ all of us have up our sleeves.

So it is for me as well. We willÂ work on local energy, local food, continue the hard awareness-raising, and put systems in place. We willÂ  “go places.” ButÂ the compass that guides us there will be the precious things: compassion with one who is face-to-face, courage in small actions, the grief and joy of standing in a field together. They show us our duty.