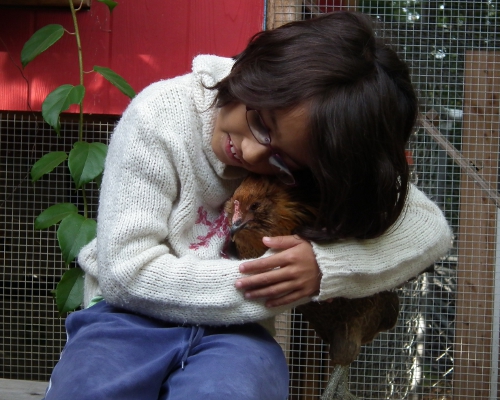 Amie took the news of Nocty’s demise very well, much better than I thought she would. She was shocked, then cried a little. After absorbing the news, we went to see the body on the porch. It was dark so I brought a flash light. I lifted the cardboard to uncover the body and Amie stroked Nocty’s Â soft feathers. She said, “She is still a beautiful bird.” Then sheÂ became very curious. She tried to open the wing, remarked on the stiffness and I explained that when the blood is no longer flowing, the muscles get stuck and stiff. She even peeled open the bird’s eyelid and peered into the eye, searching for something. Â I didn’t ask or talk, wanted to let her thoughts be free.

Then we went to check on Oreo, Nocty’s “sister,” who is now alone at the mercy of the older hens. The chickens were roosting, so she didn’t get to talk to Oreo, but this morning she went out to the coop before school and sat with her for a while. Her abiding concern, as mine, is with Oreo.

She also asked if we could keep Nocty the way she is and I explained we couldn’t, that she will rot. I explained that rotting is Â being returned to the flow, that specialized insects and bacteria go in and tear down all the bonds that bind the flesh together and so release the atoms back into the stream and so on, into other bodies and new life. Â I said to let that happen we should bury her, put her into the Earth, and we discussed where on the land. I proposed one of the garden beds. Then Nocty’s atoms would go into the lettuces and we could eat them. Amie liked that a lot. Encouraged, I proposed that at the end of the season we could dig up the bones. She liked that too.

We have set Wednesday after school aside for Nocty’s burial.Â We’ll also Â do research on whether it will be safe to eat those lettuces, and on how to preserve animal bones.