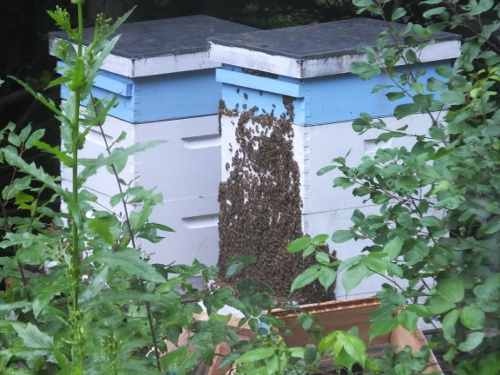 I just went into my two hives. One of them at least has overcrowded and hot – indicated by the massive bearding that begins in the late afternoon and continues through the night until the foragers go out again in the morning. They don’t abandon this way of keeping the hive cool inside even when it rains: scores of bees drown then. No swarming, though. Knock on wood! But if these hives survive the winter, I’d better be ready come spring!

I harvested 90 pounds of honey at the end of July. Considering these were first-year packages (on fully drawn-out frames, however), that was a gift. For the harvestÂ Â I used a bee escape built and lent to me by a friend. It was the first time I used it and it worked Â great, on both hives (24 hours each). No more brushing angry bees off the individual frames, what a relief!

Today’s quick inspection when the hives were in the shade was pretty mellow. I just took a peekÂ in the supers. There’s some honey in there, not much, and nothing capped. This was expected as the nectar flow has been bad, what with the drought. I had one and a half supers still dripping with honey from the harvest, so stuck one on top of each hive to let the bees clean out the frames. I’ll take them off again in a few days, before they start putting new honey in there or putting burr comb all over them.

Hopefully there will be another honey harvest after the fall nectar flow. We’ve had a week of good, mostly gentle rains, so hopefully the flowers will get going and flowing again.

I’ve become a much more hands-off beekeeper over the years. In my first year I used to go in every two weeks. Now, every time I prepare (lighting the smoker, getting into my gear in the backyard) and walk over to the apiary, I need to take a bit of a breath to calm my heart. Over the years I’ve come to realize that these are massive organisms I am messing with, often 50,000 bees busily doing their complex and enigmatic thing, who knows in what kind of mood, under what stress. That I am bigger may mean nothing to them: they’re 50,000, I’m just one. I often imagine what it would be like to accidentally drop a full frame or box, to go in at the very wrong moment, smelling of the wrong thing. Yes, there’s some fear there, but not the paralyzing kind, soÂ I am not hands-off because of it. If anything, itÂ makes my experience when I go in so much more intense and pleasurable. No longer thinking I am in control, but moreÂ there, with them, more respectful and awed (I for them, if they respect me, I wouldn’t know or presume), and more myself, too. So,Â if we realizeÂ Neighborwoods – Â a bit more land – I think that I’ll buildÂ a much bigger apiary. Twenty, even fifty, hives, with room for queen and bee rearing, Â now that would be life!