Both my colonies perished over the winter. When I opened them up in early spring I found only a handful of dead bees (no queen, that I could see), and quite a bit of honey left. It was too late, the bee bodies were too decomposed, to send off a sample to the Beltsville Lab, where they would try to diagnose the cause of the demise (for free, too). So I can only speculate about what happened. One scenario is that on warm days foragers left to look for pollen or water and, for some reason (pesticides, mite disease), didn’t return, then a new group was roped into foraging, dispatched, didn’t return, and so forth, till there was only a handful left. Or they all left en masse, in a massive death exodus…

I asked my neighborhood beekeepers. The results alarmed all of us: some (strangely enough those with apiaries with more then six hives) did well,Â  but most of us with smaller apiaries has 50-100% losses. Altogether, of the 23 hives that I know of (kept by 10 backyard beekeepers), 16 did not make it: a 70 percent loss. And in 90% of those cases the same scenario played out: a handful of bees left, and lots of honey stores. This situation is alarming because we don’t know the causes, so are groping for solutions – with a wide-spectrum approach on all fronts (pesticides, acclimated bee populations, mite treatment, etc.) a big task for the usual backyard beekeeper, and especially for beginners. It is also unsustainable. We can’t keep buying bees and queens from the state of Georgia…

Time to do something.

As a first step I put all my thoughts down in a letter to all my neighbors in our local newspaper (copied below). Then I ordered no less than four packages (yes, those Italians from Georgia – one last time) and started sourcing local queens. I also successfully petitioned the Wayland Conservation Commission to let me, and any local backyard beekeeper, keep those bees near the Community Gardens (pollination services), which is also near the Sudbury River and large stretches of conservation land (lots of bee forage).

I hived those packages on April 11 and they are thriving. Soon I will check for mites with a sugar roll – a new bee friend showed me how to do it properly, so I won’t have to repeat my one disastrous attempt. Then, if necessary, I will treat with the oxalic acid fumigator. I will also start the bees on rearing some extra queens from the Italians, and I’ll buy, beg, or borrow some other queens (local Russians, Carniolans, and mutts), for optimal diversity. And then I will split those four packages, and split again, and again, aiming to go into winter with around twenty colonies (half in Langstroths, half in nuc boxes – let’s experiment with that as well). The ones that overwinter will be split again and will be made available to the local beekeepers – no more packages and queens from Georgia for them either! Sorry, Georgia, but it isn’t working out. 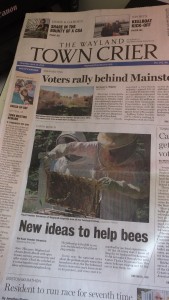 Every year the national news about the pollinators gets worse (for honeybees alone, the Bee Informed Survey shows this yearâ€™s losses at 40 to 45 percent), and every year it is matched by our local experiences. Of the 23 hives that I know of (kept by 10 backyard beekeepers), 16 did not make it through this mild winter. Thatâ€™s a 70 percent loss. The alarm bells are ringing and Iâ€™d like you to hear them, too.

But to most of you, the complex of stressors assailing the bees (explained below) may seem like one of those Big Ones that is not 100 percent studied yet, or inevitable, or so difficult that there is nothing you feel you can do about it.

Let me tell you, when year after year I open my hives and find most of my bees dead, I know itâ€™s 100 percent a sure thing, and I know that itâ€™s not inevitable, and that there is a lot we can do.

The problems are complex, no doubt about it, but science and beekeeper experience have identified plenty of opportunities to contain them. Hereâ€™s one. Some years I have found my bees dead of starvation with plenty of honey only 3 inches away, but the long-lasting â€œtroughsâ€ of deep cold prevented them from breaking their warm cluster to get to it. I wrap my hives with insulation, and this year I will switch to a hardier breed.

Every year I see an abundant nectar flow in spring, with good amounts of honey to â€œrobâ€ in early summer, but Iâ€™ve learned not to rob too much, because late summer and fall nectar flows increasingly disappoint. This indicates the gardeners and landscapers in my suburban neighborhood favor bee-friendly flowering plants in the spring, but not in late summer and fall, and that theyâ€™re good at eradicating the late-flowering weeds like goldenrod. Fall honey is the honey these colonies need to survive winter. Feeding sugar is a Band-Aid we often use, and we are switching to bee breeds that eat less in winter.

We also see more â€œshotgun frames,â€ capped brood frames in which many cells have been emptied out. Often this means that the queen mated with one or more drones too closely related to her. She is now laying â€œinbred,â€ nonviable eggs. The nurse bees have a way of sniffing these out, and they get rid of them. When the beekeeper replaces that queen, she may find the next one is just as bad. That is because the genetic diversity of our bees is coming up on a major bottleneck. Parasites and viruses, pollution and loss of habitat have wiped out the genetically rich feral bees with whom our queens could mate, and commercial queen breeders use too few queen mothers (it is estimated that less than 500 queen mothers are used to produce around 900,000 daughter queens annually for commercial sale in the U.S.). Moreover they breed queens for honey production and gentleness, not for longevity. All this is not so easy to solve, but breeders are working on it, and adding diversity to the backyard apiary will help.

We also see increasing pressure from varroa mites. Imagine a parasite the size of a rabbit sinking its teeth into you, spewing all kinds of viruses and diseases into your body. That is â€œvarroa destructor,â€ the pest that, in the â€™80s, killed off almost all the feral and â€œkeptâ€ bees (those were hard years). Injudicious use of pesticides soon created â€œsuper-mites,â€ which we cannot get rid of. Beekeepers can use Integrated Pest Management and organic treatments. We can also switch to so-called â€œhygienicâ€ bees, which groom each other of most mites.

The lost bees of Wayland may have suffered from any or all of the above â€“ not acclimatized, lacking in forage, compromised by their breeding, weakened by mites and diseases. Marla Spivak, in a TEDtalk that I recommend, asks you to think back to the last time you had the flu. Now imagine you have to search a long time to find any nutritious food, and that when you find it, it is poisoned.

Our bees may, at the end of fall, have had the misfortune of foraging a patch of late blooming and exceptionally toxic flowers. Or they may, over the course of the year, have foraged several below-threshold toxic fields of flowers â€“ below threshold for one dose. Usually the toxin in question is a neonicotinoid, a type of systemic pesticide used in monocultures of corn and soy and in gardens all over our town. This would have weakened their immune systems even further and/or messed up their orientation. And so they didnâ€™t make it home.

The last thing I want is for this lineup to masquerade as â€œhopeless.â€ It truly isnâ€™t. With our BEElieve beekeepers group, I plan to change my beekeeping practices and start raising a diversity of local, acclimatized, hygienic bee â€“ a â€œWayland Bee.â€

May I ask you to stop spraying the neonicotinoids, to ask your landscaper to stop spraying them and your favorite garden center to stop selling them? â€œNeonicsâ€ come in two forms. The first is in a bottle that anyone can grab at the garden center or hardware store. If the list of active ingredients names one of the following, that bottle contains a neonic â€“ Acetamiprid, Clothianidin, Dinotefuran, Imidacloprid, Nitenpyram, Thiocloprid, or Thiamethoxam. You can safely dispose of it by returning it to the store or by bringing it to Household Hazardous Waste Day at the Transfer Station, which takes place twice a year, the next one on June 18 (register here).

The second way you may be importing neonics is in seeds and plants. Neonics are systemic in that you need to treat only one part of the plant, or the soil in which it grows, or even just the seed, and it will suffuse the entire plant, including the nectar and pollen. More and more ornamental plants are being grown by a few ultra-large suppliers, and virtually all of them use neonics. Ask your garden center if the plant you like has neonics in is history. If it does, or theyâ€™re not sure, leave that plant on their counter.

But wait, there is even more you can do! Grow bee-friendly gardens that set out a nectar buffet from early spring to late fall. Join me in asking our town, the stateâ€™s Highway Division, and the utilities to plant low-growing flowers in fields, along roadsides and under power lines. You will be helping not just honeybees, but all the pollinators.

We can do this out of admiration for these amazing, hardworking creatures, and also simply because we like to eat. Without pollinators, weâ€™d have no broccoli, cucumber, tomato, eggplant, lettuce, watermelons, apples, pears, almonds, cotton, and much less meat (alfalfa, the main livestock food, needs pollination). Letâ€™s make it safe for the pollinators to feed themselves, meanwhile feeding us as well.

Kaat Vander Straeten lives in Wayland and has been a beekeeper for six years. She can be contacted at kaat@transitionwayland.org.