I got a comment from Ashley about her mead. My apologies, Ashley, for responding so late, but in any case I can’t help much. I’m just a dabbler in mead myself, and do most mead making by the seat of my pants, eyeballing it and experimenting. I’ve not yet had to throw away any mead, but some (usually a melomel) has tasted better than others! If you would still like some ideas, I’d say your yeast didn’t have enough sugar, or lacked something else, and so consumed all it could then died too quickly. I’d rack the mead to get rid of the graveyard at the bottom and to oxygenate anew, then add new yeast and sugar.

As for my mead, DH will need the two big carboys soon for his wine, and so I had to empty the one with an old mead that was still sitting in the basementÂ (started in August 2014). It was flat and tasteless, but it hadn’t turned toÂ vinegar, so instead of chucking it, I decided to experiment. I racked itÂ into two smaller bottles. In one I put dried apples and peach leather. In the other, one fresh green apple and a large spoonful of a friend’s raspberry jam. I put the bottles in the porch to warm up a bit and will add fresh champagne yeast and some more honey and let it ferment away again. Like I said, it’s all an experiment. 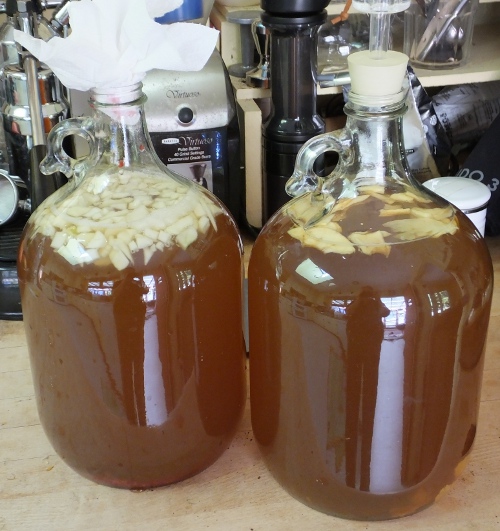