A month ago I attended a workshop on Korean Natural Farming (KNF),Â led by Aaron Englander,Â  at the Natick Organic Community Farm, where they implement a lot of KNF techniques. I deeply appreciate many of the ground tenets of KNF: make it cheap (and so available for even the poorest), use as many inputs as possible that are already in the environment (for instance, capture indigenous microbes instead of buying laboratory microbes in a bottle), minimize waste, be objective and scientifically rigorous, and take the long road. Take care of the soil life and all aspects of plant growth. As Aaron said: instead of forcing short breaths on your soil,Â enable the soil to take long, deep breaths. In other words: don’t add short-lived, chemical fertilizers and refrain from disturbing the life – the lungs, as it were – in the soil by refraining from tilling and pesticides, fungicides, herbicides, or anything that has the word “kill” in it.

The workshop was very demonstrativeÂ  and hands-on, and I came home empowered. I immediately started a LAB, IMO, FPJ, WCa, OHN and, last but not least, the FAA. I don’t much like acronyms myself, but in KNF they’re kinda fun :) 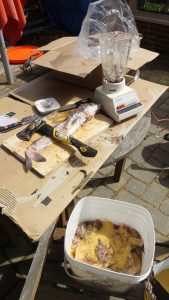 When I sourced the fish scraps from a local fish market I asked for all of it: guts, skin, bones, the lot. Apparently, the guts and even the skin are hard to get because they get removed on the boat, so I mostly got bones, tails, fins, some skin, and heads. I alsoÂ  asked them to mix up kinds of fish, hoping for some fatty fishes like mackerel. But beggars can’t be choosers, and I got only one kind, an unidentified white fish. Still, I was in business with 40 lbs of it! I also got 14 lbs of brown, raw sugar – approximating a ratio of 1:1 (v:v) (in KNF, approximating is just fine). This made for two buckets, each 29 lbs of fish, each 7 lbs of sugar.

It’s a messy job and I don’t recommend you do it in your kitchen. Luckily the day I picked up the fish was sunny and relatively warm so I worked on the patio. I quickly exchanged the kitchen knife for the hatchet. The ancient blender was given to me by a friend and is now solely devoted to FAA. I added a little bit of rain water (avoiding the chlorine in the tap water), to make it easier on the blender, and it did a pretty good job. Liquifying or even blending the fish isn’t even necessary – you can just chop up the fish and layer it in. 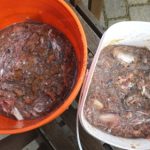 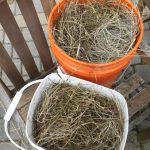 I chopped, blended, dumped the goop into the bucket, added a layer of sugar, and kept at it till the two batches were done and I had 1/3 of head space in each pail, in which I put some wet salt marsh hay – whatever is on hand is fine, to act as a smell filter. Then I put on the lids and put it in a cool, dark place. 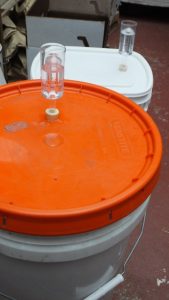 Several things happen in the bucket: extraction of juices from solids through osmosis by the sugar(it basically sucks the moisture out of them), and all kinds of fermentation. I put water locks on the lids, mainly to ensure that gasses could escape (and the whole thing not explode on me!), and not so much to keep oxygen out. From other reading it now makes sense to me not to aim just for an anaerobic ferment, but to encourage the whole diversity of microbes, anaerobic and aerobic. When we will use the FAA, we’ll after all use it both as a foliar feed and surficial soil drench (aerobic) and as a deep soil drench (anaerobic). The bucket is large enough to have both kinds of ferments doing the digesting. I propose to keep this diversity mind set in all my fertility measures. 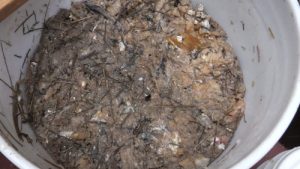 states that “after approximately 3 to 5 days, the fish waste will begin to break down and liquefy through fermentation and the osmotic pressure generated by the addition of brown sugar.” But after a couple of weeks nothing much was happening to my FAA. The top was pretty dry compared to the bulk of it underneath. I pushed the dry parts to submerge them, then topped off with a couple of chopped-up, organic, unwashed apples – which adds enzymes – and lastly some more raw cane sugar, so that no fish was left uncovered.

It takes 2 to 6 months to complete the fermentation and produce a mature FAA that will smell sweet and remain stable so keep for a long time.

FAA is high in nitrogen. As a rule, the higher the protein of the materials, when composted or fermented, the higher the nitrogen content. Mature FAA is applied in a dilution of 1:1000 (FAA:water) during the early or vegetative stage of development to boost growth and size. It isn’t applied to plants in the reproductive stages of their production cycle if you want them to flower or fruit, because the high nitrogen will stimulate leaf, not fruit or flower production.

(*) Fish hydrolysate involves not sugar but water. It too is minimally processed and cold-processed. Fish emulsion is a different beast altogether. It is heated, which represents a higher cost of production and which also denatures the proteins, carbohydrates and fats into simpler pieces, thus destroying many of the proteins, enzymes, hormones, amino acids and vitamins.