Back in winter, my friend Alex and I were planning on starting a mushroom farm on the property. Unfortunately our calls for logs (oak, birch, beech, etc.) didn’t produce any, and so the inoculation season passed us by. But all was not lost. InÂ  2010 I bought and planted mycelium of King Stropharia.Â  Stropharia rugosoannulata, also known as the wine cap stropharia, “garden giant” or burgundy mushroom, never materialized in the bed where I planted it, but a couple of years ago he started making regular appearances, all over the place, also in my vegetable garden. He did so again on April 5 after it had rained for a couple of days, and I was ready!

Alex and I had planned to buy spawn, but this was better. This was not some sterile, mamby-pamby lab-grown weakling but a rugged, over-wintered, tried and tested Stropharia who was already at home in my garden! I plucked some of the mushrooms (left some in the ground too) and collected the spores from several of them. Others I fried up with some onions, salt and pepper, but not before I cut off their stem butts and planted those in between two sheets of wet cardboard. 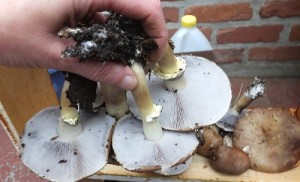 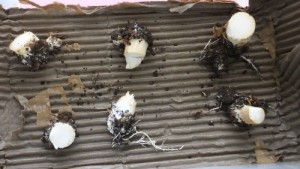 I put the butts in plastic boxes which I kept in my “cool closet,” where I keep all the medicinals. The mycelium grew steadily and today they are as ready as I’ll ever know they’ll be. Paul Stamets says something like: the mycelium runs and if you don’t let it, it will die. It is also overcast and threatening to rain, so the weather too said, let’s run with it! 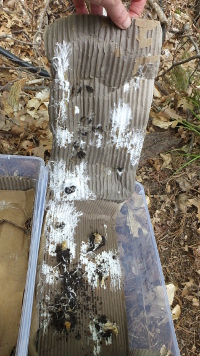 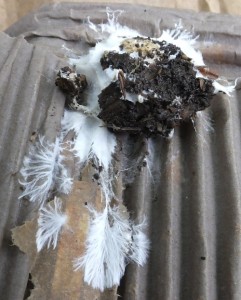 I chose a spot underneath a small oak and my largest hazel (mushrooms and hazel nuts, can you think of a better combination?), carefully scraped off and set aside the top inch of duff/soil, then lay the cardboard mycelium down. Then I replaced the soil and added a healthy cover of decomposed leaves, then watered, with rain water, of course. Let’s see what happens!

And this wasn’t even the largest one of the clutch. Am I concerned about fungi all over my vegetable garden? No, on the contrary, Paul Stamets has shown thatÂ  many fungi, among them King Stropharia, are great companions to plants!