Ah–ahcronyms! That stands for Korean Natural Farming: Fermented Plant Juice and Oriental Herbal Nutrient. After weeks of prep, FPJ and OHN were ready to “decant” and use and store. 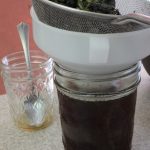 On 5/2 (about a month ago), I went about in my garden in the early morning collecting the meristems of all the most vigorously growing plants that I could find. The meristems are the undifferentiated growing tips of plants, full of energy and growth hormones. These are the ones you want in your Fermented Plant Juice. I added comfrey (smallest, newest leaves), common and spear mint, and all kinds of mostly unidentified weeds reaching for the sun. This document from the University of Hawaii has a list of which plants to look for, to which Aaron Englander, who taught me this recipe, added the more readily available purslane, nettles, and mugwort. For the purists, each FPJ batch is just one plant – and that FPJ is then the best for that particular plant. I only make a one-plant FPJ wen I have enough of it on hand.

I packed these leaves and shoots into a jar, mixed them with a 1:1 ratio of raw brown sugar (by volume), leaving 2/3 of head space, adding a lid of sugar on top and packing it down. Then I covered with a cloth and let it sit at room temperature. After a week I found it didn’t make much juice, so I added a small amount of (non-chlorinated) water (a tablespoon) and that got it going really well. Today I poured off the liquid – amazing how much poured out after all. It is stored in the jar with a cloth, in a cool, dark place. FPJ, which is packed with growth energy, is used weekly at the growing stage of plants as foliar feed (at 1000:1 dilution) or a soil drench (at 500:1).

{UPDATE} 4/16: after almost a year, the FPJ is still looking good. I used a lot of sugar. If in the recipe you use only enough brown sugar to extract the juices,Â  then once you’ve poured off the juice you should add more brown sugar to preserve it, especially if you live in a hot, humid place. 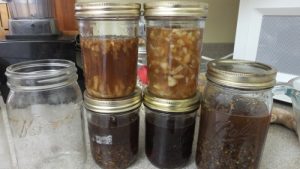 Also on 5/2 chopped up and crushed the five ingredients for the OHN and put them each in their own jar:

I added beer (the one I happened to have in my fridge, a hoppy honey beer; you can also use rice wine) to hydrate these and covered them with cloth.

After 2 days, I chopped and crushed the two wet ingredients:

Then I added 1:1 raw brown sugar to all five so all the jars were 2/3 full and covered them with cloth. I let them ferment for 5 days, then I topped all of them off with vodka and closed the jars with lids. I shook them every day for two weeks. Then I strained the juices (but see *!) into two big jars and covered them with cloth (not sure if that’s necessary, but I guess some more fermentation may happen if not all the sugar has been converted yet, and if the jar is closed off, it might explode). Here’s a good fact sheet on OHN, it also uses turmeric. 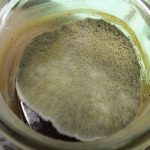 {UPDATE} 4/16: after a little less than a year I found both OHN liquids had a thick layer of whacky mold on them. This is because I never capped it tightly. The preserving alcohol evaporated, and mold got in. I simply scooped off the mat of mold, added vodka, and capped.

OHN is used weekly at all stages of plant growth as a health elixir and immune booster, as a foliar spray, soil drench, seed soak, or compost booster. It has to be diluted 1000:1.Â  It is also one of the ingredients in IMO 4. 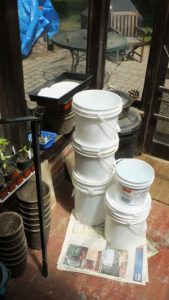 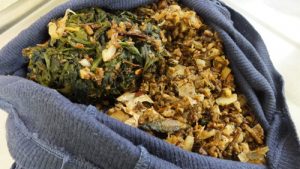 (*!) Now it turns out I should have poured off 2/3 of the liquid and kept the leftover liquid and marc for another round of extraction – you can use the separate jars up to five times. It was too late when I read that, I had already mushed the marc all together for one final press. Then I read you can use that marc for a compost tea, and so that’s where it went, along with the marc of the FPJ.

I have a small, rotating collection of buckets with filtered tap water that I leave open in the sun for 24 hours before putting on the lids to keep dust and animals out. I do this to let whatever the water filter didn’t get, evaporate out – a matter specifically to get rid of the biocide chlorine. I used one of the 5 gallon ones for the tea: wrapped the marc in an old cotton shirt, hung it to steep in the water. I’ll play this one by ear as it will depend on the temperature during brewing.

{UPDATE 6/13. This is what it looks like now, without oxygenation. Smells good too. Smells sweet. 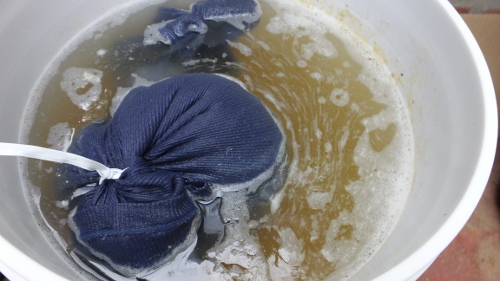