I decided to give the double four-over-four-frame nucs a la Mike Palmer a try and ordered a set from Better Bee. Whether it was their milling or my hammering the boxes together, I don’t know, but the two top boxes don’t fit together well. With some careful placing, they do the job, but they’re not snug.

I took Queen Sam’s split out of her five-frame nuc box and shifted her into one side of the double nuc a few weeks ago. They filled out the bottom and top boxes in no time. A few days ago, I moved another split (for Queen Tatjana, a pure Russian from Dan Conlon’s Warm Colors Apiaries) into the right side and promptly ran into problem number two.Â  As I was working the bottom box, many bees insisted on sticking to the side of the other nuc’s top box. I had to brush them down quite aggressively, and even then too many to my liking were squashed when I put the second box on. I wouldn‘t have put that second box on, because the new colony still only covered three frames, but with this kind of outfit you can’t of course work with just one box on one, two on the other. If you do, it looks like this: 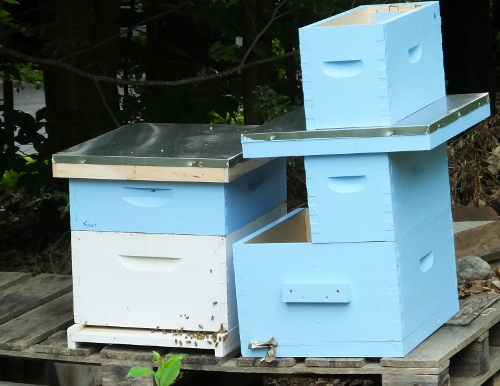 And this is exactly what it looked like today.

I moved Sam’s people to the full hive you see on the left: they were more than ready for a lot more space. After inspecting all eight frames, I had not found the unmarked Sam. There she was: on the inside of the bottom box, hiding among a good three hundred bees who had also decided to hang out on the box. If that box hadn’t been attached to the other nuc, I could have easily picked it up and gently shaken them all into their new home. As it was, I was fortunate to have my hadny-dany queen catcher available and after much searching, spotting and losing her again, I grabbed her and moved her over. I had to keep that box open like that so the other bees could make their own way over there as well. (Forget about unplugging their entrance: too many foragers would have flown into the wrong box.) Luckily there was no wind because the contraption wasn’t quite stable. A few hours later, the nuc box was empty and I closed it up: 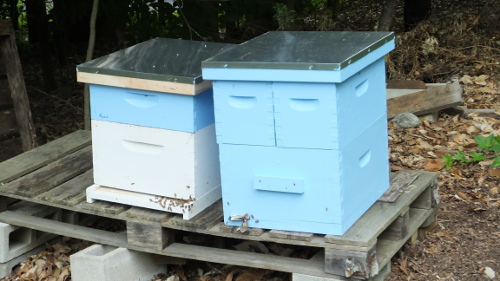 It goes to show that one best has two colonies in one double nuc that are more or less on a par, but I think I will only use this setup as a true nuc, that is, one box with four frames each, for increase and mating purposes only. That avoids the problem with the ill-fitting top boxes and the bees climbing up them as you work the lower box.

Both splits so far have been off one hive (Borgia’s hive), and I have one more strong hive that I could split, maybe once, maybe twice. Time is running out, because the bees need the time to build up before winter. So far I have four Italian queens (Borgia, Constanza, Beatrice and Laura, who is the daughter of the superseded Bianca – she is in the house but not yet laying eggs), one Sam Comfort “mutt” (Sam, who is a beauty!), and now the new Russian, Tatiana, whom I’ve only glimpsed through the screen of her cage.

I’m hoping Sam keeps laying the way she is, then I may steal one frame of her young larvae and try my hand at grafting. I have all the tools and some of the know-how ready. I am planning on using the Cloake Board on Queen Constanza’s hive, which at last inspection was the strongest, most populous hive. If it happens, it will be soon, so stay tuned!