It’s been hard in our neck of the woods. We had 0.69 inches of rain this month. Not even one inch. The Department of Environmental Protection has issued a â€œSevere Drought Warningâ€ for my county. Thunderstorm after thunderstorm hasÂ  evaporated, glanced off or split around our area. The Wundermap shows their tragic course all too well: other places get the rain, here we get a drop or two, some damaging, desiccating wind, but no relief. I’m looking at the map now: a massive system is bringing rain in the west, but it will pass just south of us, again.

Our town has instigated a partial watering ban (irrigate between 7 pm and 7 am, every other day), which I suspect will soon become a full ban.Â  The farm three miles from us, from which we get our CSA box, is postponing further plantings until their irrigation ponds and brooks have been replenished. That means we may not get fall produce from them. 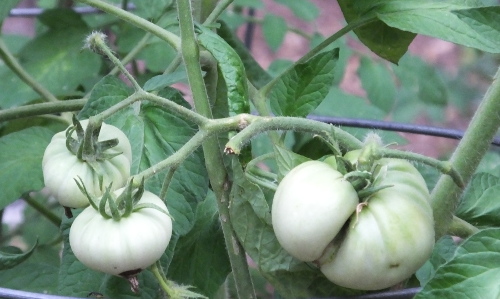 My gardens, annual and perennial, are hanging on by their fingernails – it sometimes literally looks like that, with the leaves on trees and bushes standing up, showing their paler undersides, like hands reaching up into the sky, begging for a drop (they’re actually orienting their leaves for minimal evaporation and solar exposure). Even though I water every other day, all are thoroughly stuck in a vegetative state. Haricots verts have been harvested (2 lbs of beans smaller than I usually harvest them, but they failed to grow bigger) and this year there will probably not be a second harvest, which is usually more abundant, because they’re not making new flowers. The tomatoes plants which had grown so many large, plump fruits are not ripening them at all. We’ve been stuck at code green for weeks now and the tomatoes are starting to take on that bloodless, necrotic look. The equally thirsty critters, chipmunks and squirrels mostly, have been eating away at the sour fruits. Few flowers appear and they die off without setting fruit, and it’s not for lack of pollination as I shake them all the time, and the bumblebees have been abundant.

The gardener too suffers. I’ve never been good in the heat, and these 95F-100F (in the shade!) days are brutal. I hand water every other day, in the early morning or later evening and it’s about all I can do. And so my poor (or should I say, lucky?) bees have had to do without my constant interference. They beard or “hang out on the porch,” as we say, by the thousands, even at night to relieve the temperature inside the hive. The nectar flow seems to have slowed down considerably.

The chickens are doing quite well, finding shade and clean water. But for the broody one, who insists on sitting on a pile of straw in the hot nest box all day. Her comb isn’t full and dark like the other ones. During the hottest time of day I open the nest box and pour spoonfuls of cool water into her panting beak.Â  I hope she stops being broody soon. Egg production is down somewhat.