Ah, the troublesome double nuc: time to get rid of it. The two splits (Hive 6 with queen Tatjana and Hive 7 with queen Anna) were growing out of it. The plan: to move H6 – whose entrance was facing west (“backward”) – to the common apiary (3 miles away), and to move H7 into her own 10 frame deep in the same location (home yard; entrance still facing east). But how to move those bees? You can’t just pick them up: there are two colonies in one box. 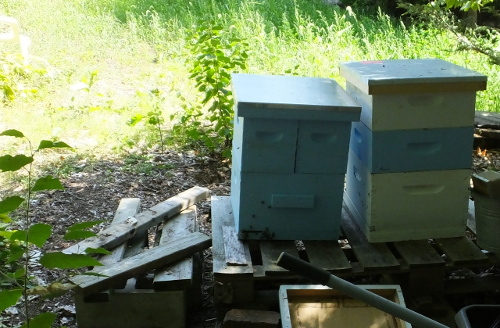 I went in yesterday evening around 6 pm, when they were all home, planning to transfer the 8 frames into a deep, then to move them. Simple. However, there were too many bees stuck to the sides and bottom of the lower box, which is of course “attached” to the other hive, so you can’t shake those bees off.Â  I walked away and returned today when the bees were flying. I set the new deep right next to the box so the entrances aligned. I moved over the top four frames, took the top box off and shook the bees off it into the new deep. Then I had this situation: 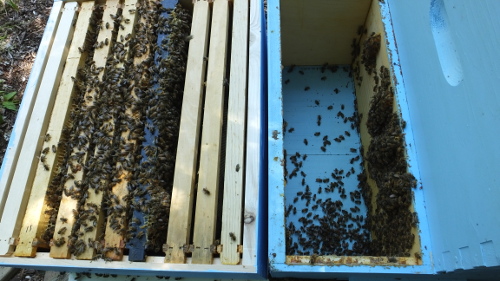 Still a lot of bees in the bottom box, but not too bad. I could at least make out if the queen was there (I hadn’t spotted her as I moved the frames) and, relatively assured she wasn’t, smoked those bees and scraped off the burr comb on the side. It ha brood in it so it would entice some nurse bees to stay with it. The foragers were coming in hard and going straight for the new entrance/box. Soon the bees in the nuc box were pouring out the exit and moving over as well. Satisfied, I closed the new deep with the outer cover and put the old outer cover on top of the other nux box (weighing it down with the top nuc box) – a deja-vu configuration. 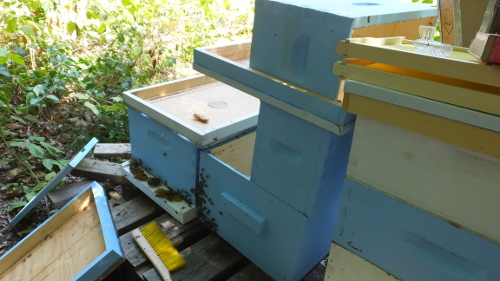 Around 7 pm after I saw the nuc box was empty, so I walked over, picked up the deep off the bottom board and set it down inside an upturned inner cover, using it as a tray. It being a warm, humid evening, quite a few bees were stuck to the front of the box, and quite a few bees were left behind on the bottom board. I shook and brushed as many as I could into the deep, quickly closed it with another outer cover. This, I’ve found,Â  is the best way to contain the bees: there is no hole or gap for the bees inside to escape through.The bees still stuck on the outside of the box, however, as a different matter. I grabbed a sheet, wetted it thoroughly, and threw it over the box, then carried the darn heavy thing into the back of my car (a station wagon). The sheet worked out nicely: no bees bugged me on the 5 minute drive over. 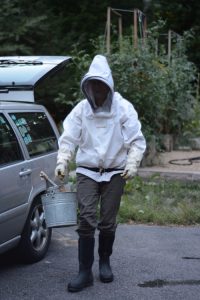 < Here I am, all geared up. The elasticÂ  of my bee vest is shot, so I put a belt on – it’s not pleasant to have a bee in ones vest or veil! I wear the heavy boots not so much for the bees but for the ticks.

Unfortunately it was already a little too late and darkening. Bees hate it when you go in at night. On top of that, one of my fellow Common Yard beeks had just done a sugar roll on the hive right next to the open spot where I was to place Tatjana. I hadn’t even opened my bees yet or his were spitting at me. But, no turning back. I set up the cinder block hive stand, the bottom board, then lifted the box out of the car, sheet and all, and set it down on the grass. The moment I pulled the deep out of the outer cover tray, the effect was startling. Bees poured out on all sides, and I’ve never heard such a roar – I’ll hear it all night. I kept on, maneuvered the box onto the bottom board. The tray was full of bees and I arranged it in front of the entrance so those could walk in. I tried to see if the queen was on it, but it was too dark already.

I took a few brisk walks around the field to try to shake the five or so bees chasing me, then got into my car and drove home, suit still zipped up, bees buzzing aroundÂ  me. Didn’t get stung, though!

Tomorrow I will return to retrieve my smoker bucket and sheet – had to abandon those. I won’t inspect for a couple of days. I’ll leave them bee for a bit… 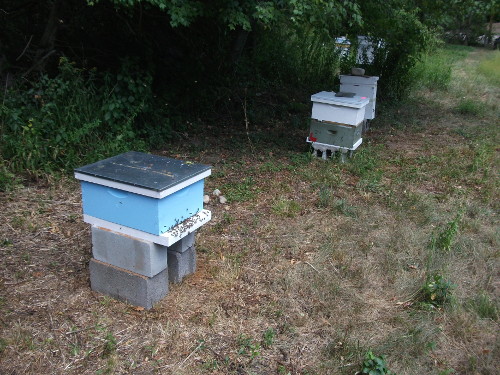 {Update} Tatjana’s bees look okay, very busy. Here they are in the new field. They need an entrance reducer. It’s robbing time. I’ll give them a super with honey in a few days, when I’ll also check on the queen and install some hive beetle traps.

The move of Hive 7 with Queen Anna went smoothly this morning: I moved the 8 frames over – looking good! – then set the old boxes in front of it so they can crawl in. Easy peasy, that one.